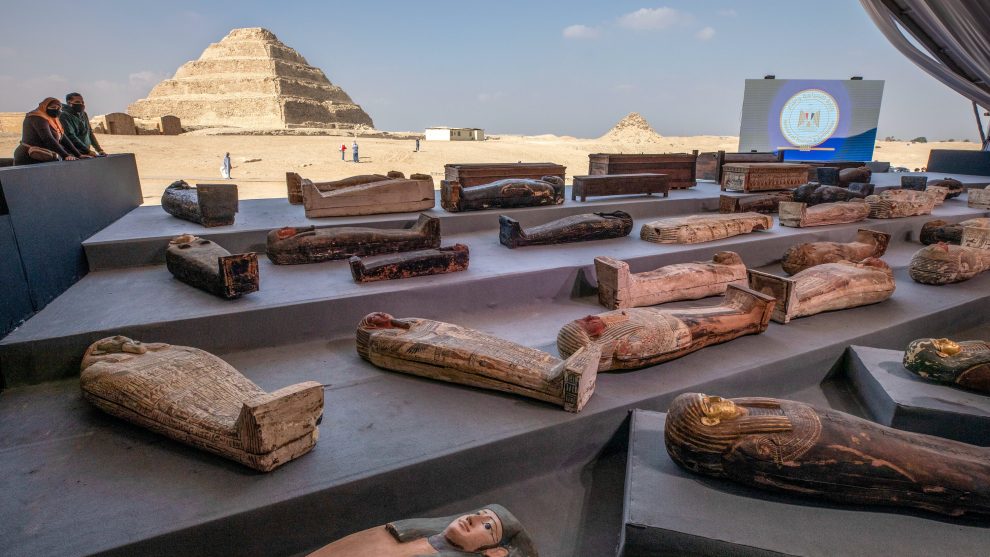 Archaeologists found Mummies at a grave site dating back 2500 years

Saqqara : In a recent excavation conducted at the Saqqara Necropolis archaeologists were able to dig up more than 100 Egyptian coffins dating back to more than 2500 years. The scientists working on site have confirmed that the discovery will help us better understand the process of mummification and its significance in Egyptian culture.

“It is the quantity and quality of the discovery that makes it special.” Said Mostafa Waziri, chief General Of Egypt’s Supreme Council of Antiquities. The department opened one of the coffins to X-Ray date it. It showed that the mummy was that of a healthy man, about 5 feet 4 inches to 5 feet 7 inches in height. He died aged around 40 to 45.

All the coffins are on display at the Saqqara Necropolis and will be for the few coming days. The site has been a noted burial ground dating back to 3500 BC, the time around which the first Dynasties of Egypt were established.

The amount of care taken in preserving these coffins they belonged to a well-established Egyptian family. Recently quite a lot of new discoveries are being made in the field of Egyptology. Just last month archaeologists were able to revive 12 coffins stacked on top of each other inside of a well. In the same week a few more were found in a shaft inside one these tombs.

Egyptologists have said that a lot more mummies are to be found in the region and any day they expect to come across another stockpile?

Contrary to the popular myth that Hollywood has been able to peddle all these years, Mummies are not clothed-blood-thirsty Zombies. In fact mummies have been found all over the world and simply is a human/animal corpse that has been preserved naturally or artificially. However, like Hollywood suggests the practice was particularly famous in Egyptian Culture where Pharaohs and members of Prominent families were set to rest as a mummy. The Modern obsession with Mummies started after the Tomb of King Tut was discovered along with all the treasure he was put to rest with.