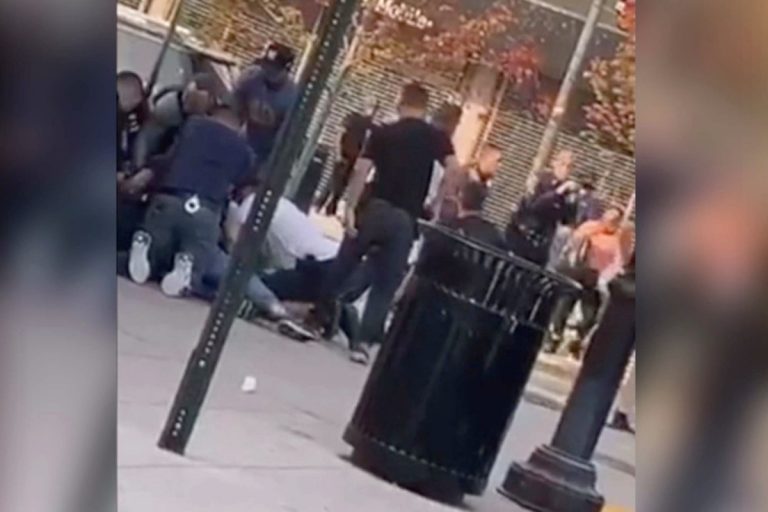 A Rochelle man was taken down and put behind bars after he starts firing through the busy Yonkers on a Friday afternoon.

It came to be witnessed around 4 pm in a crowded Getty square, just a block away from city hall when a police attempted to carry out a traffic stop at a red light and the 24-year-old man was suspected to have driven off in his vehicle. The man got out from the car with a handgun and took off on foot after a three-minute vehicle chase, Yonkers Police Commissioner John Mueller said.

“This is in broad daylight. This is one of the busiest times we have in Getty Square,” Mueller said. “Kids are coming home from school. People are coming home from work … There was a mother with a baby carriage trying to get out of the way. These officers did an absolutely picture perfect job. It couldn’t have been done any better,” Mueller added.

Chasing for several blocks, five of yonkers policemen and tried to subdue the gunman with a taser but failed at first attempt! Then they tried to pin him to the ground, he took off 5 shots at the pedestrians, including a woman with a stroller and a boy on a bicycle —  scrambled for shelter.

One of the bullets that the gunman fired went into a store across the street, but nobody was hurt by the five bullets fired from a powerful .45 caliber gun.

“When I think about the disaster and the tragedy that could’ve happened if things were just a little different,” says Mueller. “If the restraint of the officers was different, the positioning of people with baby carriages and the young boy on the bike, how bad this could’ve went, how fortunate we are that it did not go in a negative way.”

“He was brandishing the gun as he was crossing the street when the officer grabbed him by the shoulder,” witness Raymond Fox said.

“This could have been terribly tragic in so many different ways,” Mueller said.

The Officers were applauded by both Mueller and Yonkers Mayor Mike Spano for their heroic action and also for taking down the gunman without using any deadly forces.

“In my 28 years, I have seen very few incidents that have had such restraint, such control,” the commissioner said. “It was a picture-perfect job, and we couldn’t have asked for it to be done any better.”

“They were fired at and they were able to take this individual down without firing a shot back — putting their own lives in peril because they did not want to risk the lives of the hundreds of people that were in Getty Square,” Spano said.

The officers involved also suffered minor issues. One officer who was involved in the arrest went through difficulty breathing and was taken care of at a hospital, Mueller said. Another suffered a broken finger.

“The suspect has two prior gun charges and is a convicted felon”, Mueller said.

“The guy (in the light blue sedan) stuck his head out of the window, tried to drive off, slammed into a Mercedes, left the car in drive and took off on foot,” Carrington said. “The cops ran right by me and chased him. I wanted to go after him, but the police don’t know who I am or if there was anyone else in the car, so I stayed put.” “Every car around me was banged up and damaged. The police cars, the ESU truck, the Mercedes, everything. It was wild,” Carrington added.

The name of the suspect ‘the Rochelle man’ is not yet released to the public.