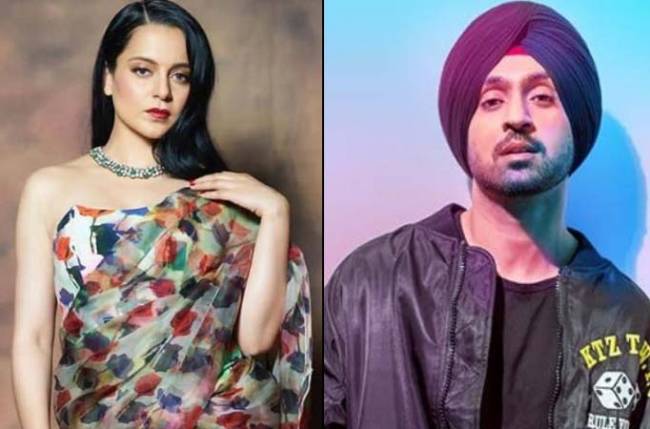 Kangana Ranaut leaves no stones unturned for criticizing and getting involved in controversies. Her most recent one, which is in the limelight and quite trending, is her war with Diljit Dosanjh on Twitter. The playing of fighting with words ensured between Kangana and Diljit resulted from the farmer protest, which is going on in mainland India. In fact, the war between them is not stopping anytime soon and is getting more and more uglier. Now the pair responds to each other with words and calling out names following a series of tweets. But, the Punjabi community and many Bollywood personalities are coming out in support of Diljit due to the war.

Starting of the War between Kangana Ranaut and Diljit Dosanjh

Kangana tweeted recently about an elderly lady participating in the farmer’s protest and took a dig on her as the famous ‘Shaheen Bagh dadi’ Bilkis Bano. In her tweet, she said that she is the same dadi who got featured as the most powerful Indian in the Time magazine and is available in a hundred rupees. Later on, Diljit criticized Kangana for misidentifying the elderly Sikh woman as Shaheen Bagh’s Bilkis Bano. He also revealed her name as Mahinder Kaur and asked her to see the proof by sharing a video of the woman wherein she talks about her engagement with the farmers’ protest. The original Twitter post of the woman got deleted by Kangana but did not refrain from retaliating back at Diljit by using strong words.

Kangana responded to the tweet of Diljit wherein she referred to him as the pet of Karan Johar and called herself the lioness. She said to Diljit that she had seen the same lady, Bilkis Bano protesting for the farmers and the Citizenship Bill at the Shaheen Baag. She does not even kn about the Mahinder Kaur lady and asked everyone to stop the drama going on. But, Diljit also did not back down and hit out in Punjabi to Kangana. In one tweet, Diljit called her mannerless and woman, and she does not know to respect anyone’s mother or sister. He also said that he is from Punjab and Bollywood. Thus, he will not sit and listen to her words but will return it two-fold. Kangana also said that she only talked about the Shaheen Bagh lady and not anything else. So if anyone can prove something, she will apologize.

Diljit Dosanjh is getting support from the Punjabi film industry various celebrities after his ongoing war with Kangana. Some of them who reacted and came in support are singer Mika Singh, actress Sargun Mehta, and Himanshi Khurrana, among many others. Actor Jassie Gill wrote him Keep it up along with giving an emoji of clapping hands. Sargun Mehta said that everyone has the right to express their voice as you do. The only difference is that they are fighting for their freedom while you are just speaking without any motive and reason.  Singer Mika Singh asked her to act as talented and beautiful and called her as a child.

New Bill Passed by the Senate for easy access of green cards to the immigrants
UN votes to remove Cannabis from the list of Dangerous Narcotics. India voted for reclassification too.
Comment