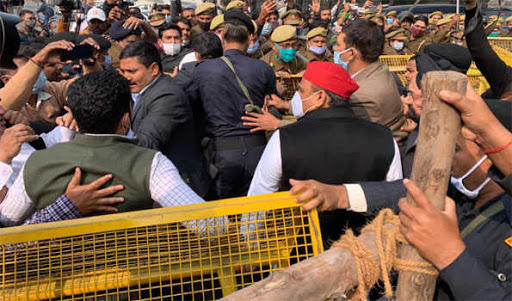 Akhilesh Yadav was detained near his residence in Lucknow

Lucknow: Samajwadi Party President Akhilesh Yadav,  the former Uttar Pradesh Chief Minister was today detained by the police after he led a brief sit-in protest in Lucknow The UP administration had blocked routes to his residence in light of the commencement of his ‘Kisan Yatra’ from Kannauj District

Mr Yadav, donning his party hat and along with a few supporters, broke through police barricades placed near his residence on Lucknow’s Vikramaditya MargAfter a brief scuffle with the police, Yadav and his supporters sat down on the road and held their protests.

After a while, the police detained Akhilesh Yadav in the middle of Lucknow and was put into a police van. Akhilesh Yadav was not the only Samajwadi Party member detained that day. Earlier even before blocking the routes to Yadav’s residence, several party members had been deatained citing Covid-19 precautions.

“We were informed that people will gather at one spot and launch a procession from there, and I understand that any crowd that remains static for half an hour or an hour, doesn’t help anyone, not even the SP President. We had even requested that the programme be dropped,” Kannauj district magistrate Rakesh Mishra told NDTV.

Starting from Thathia and ending at Tirwa in Kannauj, the 13km Kisan Yatra was a prelude to beginning farmer’s protests across the state of Uttar Pradesh.

Politicians across the opposition have faced detention when they tried to join the farmer’s protest. Yogendra Yadav has been in Delhi since the first day of the protests and was detained at the Tukri Border on the very first day.

The farmers movement outside Delhi has spread to all parts of the country with scattered demonstrations in Maharashtra, Uttar Pradesh, Kerala, and Haryana. On the ground there have been farmers joining outside the borders of Delhi from Punjab, Haryana, Uttar Pradesh and Uttarakhand .