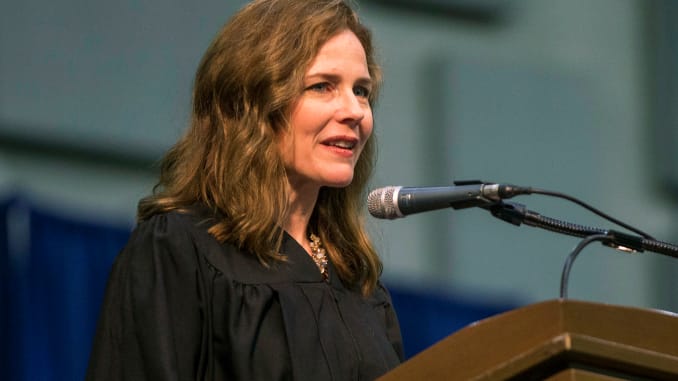 President Donald Trump has finally decided to choose Amy Coney for a vacant supreme court seat in place of Justice Ruth Bader Ginsburg, who died last Friday. She is going to replace one of the most outspoken liberals Justice Ruth Bader Ginsburg who is a feminist icon who sat on the bench for almost 27 years. President Trump is going to make an announcement for Amy Coney at an event that is planned for 5 p.m. On Saturday. Amy Coney is a 48-year-old who works as a federal appeals court judge favored by the religious rights and social conservatives. She would be the youngest justice on the high court.

Let’s talk about Amy Coney’s career, She used to work briefly in private practice before joining the appeals court. then she got her Law Degree from Notre Dame Law school after 15 years. Trump’s announcement will be coming in 38 days before voters will decide whether he will be able to hold the White House for a second time. He looks to have profound reverberations on all three branches of government.

What President Trump has said?

President Trump was questioned by reporters on Friday night whether he made a choice or not. At this Trump responded that “he will announce his decision tomorrow, ,” he said. “In my own mind, I have, and I’ll be announcing the decision tomorrow. It’s very exciting.”

Then, He was asked about Amy Coney, He said she would be outstanding for Supreme Court justice. Let me tell you in case you didn’t know that Amy Coney was appointed to the 7th U.S. Circuit Court of Appeals by President Trump. She has already started to spur a cultural battle over the place of religion on the high court and the future of abortion rights in the United States.

After facebook, Now Google will block political ads after US election polls close
iPhone 12, iPhone Mini: Release Date and All the info you should know
Comment