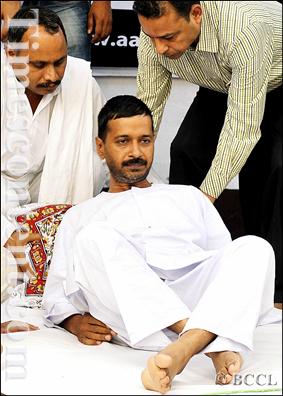 Delhi CM Arvind Kejriwal has announced a day long fast in solidarity with the farmers.

New Delhi: CM Arvind Kejriwal has been vocal about his support for the Farmer’s Protests outside the borders of Delhi. On Sunday he announced that he would be joining the protests by joining them in their proposed nationwide fast to repeal the three new farm bills.

“I will hold a one-day fast tomorrow in support of farmers’ protests. I appeal to AAP volunteers to join in. Centre should immediately accept all demands of farmers protesting the laws and bring a bill to guarantee MSP (minimum support price),” Kejriwal said in a press address.

He further went onto say that the farmer’s fears of being swindled by big corporations is a legitimate one and should be addressed accordingly rather than trying to discredit them.

Arvind Kejriwal will fast in solidarity with the Farmers

The protests have now been going on for 20 days and a few sources claim that it has turned into the largest protest in human history with more farmers expected to keep joining. Kejriwal asked every citizen to show initiative and stand with the farmers.

Initially, they faced tough resistance at the borders with security personnel using Water Cannons and tear gas to keep the protestors at bay. The police then resorted to digging up national highways once the farmers started setting camp outside the borders of Delhi.
Since the start of the protests, farmer union leaders have met with ministers from the central government including Home Minister Amit Shah. All these talks have until now not resulted in any concrete changes.

The government has shown willingness to amend the laws, contrary to farmers demands to scrap all three bills and then restructure them along with representatives of the farmers.The bill was passed through parliament in September with little debate. The government has said that the law will help farmers sell their produce to multiple buyers while the farmers are fearful of being swallowed by corporate competition