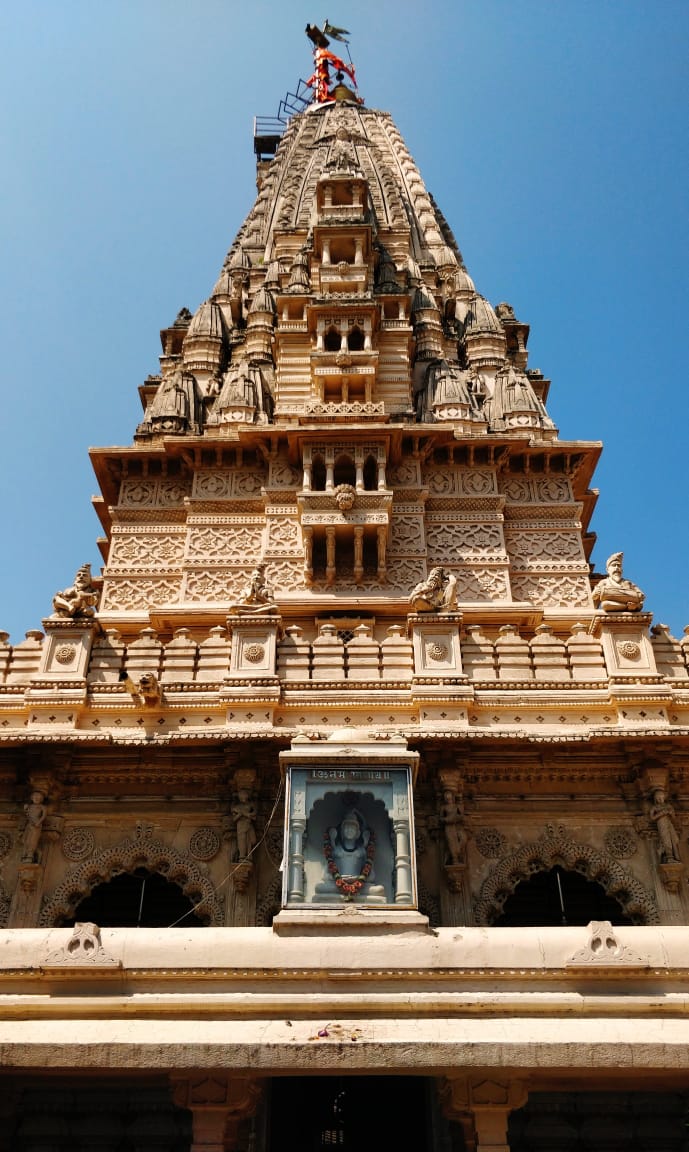 Right from the moment you walk into Babulnath Temple you can feel that you  are living a part of history. It’s beautiful ancient architecture, lush green trees and the calmness inside could easily make one forget about the hassle in the rest of the city.

A Portion of the history surrounding the Babulnath temple dates back to the 12th century. It is said that the original temple was built during the reign of King Bhimdev. However, this temple was buried over time and lost in the pages of history forever. After that, there were no records associated with the temple, which would change in the 1700s. In this century the original Shiva linga was rediscovered along with idols of Ganesh, Hanuman and Parvati. All these idols were installed when the first temple was constructed in the year 1780. A fifth idol was discovered however it had to be immersed as it was broken in the process of unearthing it.

The construction of the first temple however would not be all that easy. The land the temple was planned to be built on belonged to the Parsi community. The Parsi’s had built 5 Dhakma’s on the land and found it to be disrespectful that a temple would be constructed there, in the process of demolishing the Dhakma’s. After a long legal battle, the courts ruled the judgment in favour of the temple and hence construction began. The first temple was often looked down on as it was built by a Hindu merchant and the Gujarati community at large.

A second, bigger temple was constructed in the year 1890, with donations coming from the Gujarati community again and highly respected figures like the Maharaja of Baroda. This temple was built at the top of the mountain and was built in such a way that it could accommodate the poojari’s in the immediate surroundings. The initial temple was a marvel for its time. It was incredibly tall and in fact, was one of the tallest structures in the entire city of Bombay.

The temple went under a few restoration projects under the British Raj which included painting the temple as the British considered it to be a heritage site. Due to the temple being on top of a mountain and it’s fairly huge architecture, it remained as one of the tallest structures in the city for decades. However, a lightning bolt struck the temple and the top part of it was destroyed beyond repair in the year 1960. After that, the temple was restored to the form that we see it in today.

The history of the Babulnath Temple is not very well documented as in the initial days the temple was exclusive to Baba’s and Pujari’s who’d come there to consume Ganja and Bhang.

Today Babulnath has become a tourist spot as much as it is a religious hub. Hindus and Non-Hindus alike are welcome to the temple. It has formed itself to be a living society as it has houses along the slopes that accommodate the gurus and their families. While clicking photographs of the place, a vendor asked to click a photo of him so that he can put it on Facebook and I readily agreed which is how I got my first picture. It was reflective of how welcoming the place itself is that the people who are a part of the place are so friendly.

. On the way up to the temple, you can see a lot of children playing around, all merry but when you look at the wider picture you can see how the temple’s essence is being consumed by tall skyscrapers that have come up in the area. Every single time I visit the temple, one thing that has been constant is the guru sleeping in a shrine right at the stairway to the top.. Surrounded by photos of Lord Shiva and Sai Baba there’s almost a visible calmness in the way he sleeps knowing he’s protected.

Once inside the main temple, the architecture is all your eyes will glare at. Something so beautiful that you can’t look away even if you tried. On the way out I’d find what would be my final photo,a devotee lighting a Diya. I tried getting photos of her lighting it but it felt like it lacked something, instead, I chose to take a photo of her overlooking the temple stairs which came out to be a beautiful picture.

Even while leaving the temple, I could see devotees entering, a few were there for the silence, a few with their hands folded in prayer,= and a rare few crying praises of the lord. It was a really enlightening experience to see this temple from the perspective of a photographer and I could see how every corner of this historic site has a story to tell, how every person has a story to tell, and most importantly how every shot helps tell that story.

Also Read: Ashoka, a new series is soon making its way to Disney+