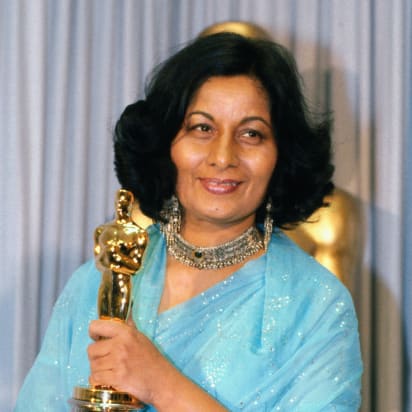 We have witnessed another sad demise of an artist who was recognized all across the world for her unmatchable efforts. India’s first-ever Oscar winner, costume designer Bhanu Athaiya recently passed away. She was 91 years old. The news got confirmation from her daughter, Radhika Gupta.

As per Athiya’s daughter, Radhika Gupta revealed that she was diagnosed with Brain Tumour eight years ago. In a statement, Gupta said that her mother was very “childlike”. She was curious and unstoppable. During her healthy years, she was constant and hardworking. Gupta further said that her mother never showed that she knew she was sick.

Also read: Amitabh Bachchan and Shah Rukh Khan get ‘Most Admired Men’ title Across The world

She was born in the year 1929 in Kolhapur, Maharashtra. She began her costume designer journey in the 1950s while she worked on a series of productions with Guru Dutt. Dutt was one of the most celebrated directors in those times. Athiya then went on to create a name for herself and worked with many filmmakers, including Raj Kapoor and many more. While she has majorly worked in Bollywood, she has also worked with Conrad Rook’s Siddartha in 1972. It was an adaptation of the famous novel Hermann Hesse.

However, the one movie that got her the Oscar and made her the first Indian to win one was the 1982 movie, Gandhi by Richard Attenborough. In her speech, she said that it was “too good to believe” that she had won an Oscar award. She also thanked Richard for bringing India to the world’s attention. Later Athiya further worked on many other projects in Bollywood including Lagaan which got her Best Costume Design at India’s National Film Awards in 2002.

Bollywood And Artists Mourn The Death of Bhanu Athiya

After the news of her death broke out, many Bollywood stars and artists took to social media to mourn her death and send condolences for her family. Sunil Shetty, the Chairman of Fashion Design Council India, said that she was the “torchbearer of design”. He further said that the fashion industry salutes her efforts to prove to the world that Fashion does not only play an essential role in movies to bring out everyone’s personalities but in real life as well.

Along with him, Actress Kasturi Shankar said that Athiya was a “legendary costume designer”. Many politicians also mourned Athiya’s demise. MP Raj Babbar also wrote that Athiya made costume designing a legitimate art. He said that he was privileged enough to wear some of her designs in his initial movies. And her death was a “personal loss” for him. Babbar is a well-known actor before the 2015 elections.