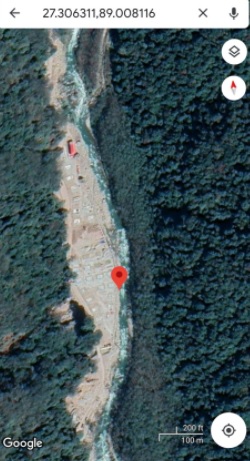 Tensions across the northern borders of India have been high ever since the pandemic started. Recently new developments risk escalating these tensions to historic highs. Per Chinese state media correspondent Shen Shiwei, he claimed to be at a Chinese settlement 2 kilometers inside the borders of Bhutan (Approximately 9 kilometers away from the Doklam Stand-off point) in a now-deleted Twitter post.

NDTV’s Vishnu Som was the first tow pick up on this story and further expanded various facets of this new development on a twitter thread. On further inspection on google maps, there indeed seemed to be a settlement in it’s infancy along the river complete with a gateway entrance and exit.

The issue is of particular concern to the Government of India since the setup of the Pangda village is approximately a mere 9 kilometers away from the Doklam Plateau where the infamous stand-off took place between Indian and Chinese troops. This could give China a significant strategic advantage if a conflict arises.

The ANI issued a press release where they stated that the government of Bhutan has not acknowledged any presence of Chinese settlement or Troop presence in the area. Major General Vetsop Namgyel, Bhutan’s Ambassador to India has also denied the presence of any Chinese forces/representatives in the area.

Many international news outlets who keep track of Chinese military and infrastructure advancements were quick to point out that the infrastructure was indeed present along the border and can be seen clearly through satellite maps of the region.

On further inspection of the area one can see Construction sites being prepared along the river where the Pangda village is situated. It may be the first among many planned settlements running through the border.

Apart from the fact that India has always been the de-facto protector of Bhutan’s national security the issue is particularly concerning since it would enable China to be dangerously close to the Siliguri Corridor. It is India’s only physical connection with its north-eastern states and it being vulnerable to the Chinese may result in the entire seven-sisters of the North-East being cut off from mainland India.

Bhutan has also been involved in border talks with China, however these were bought to a halt since the onset of the pandemic.