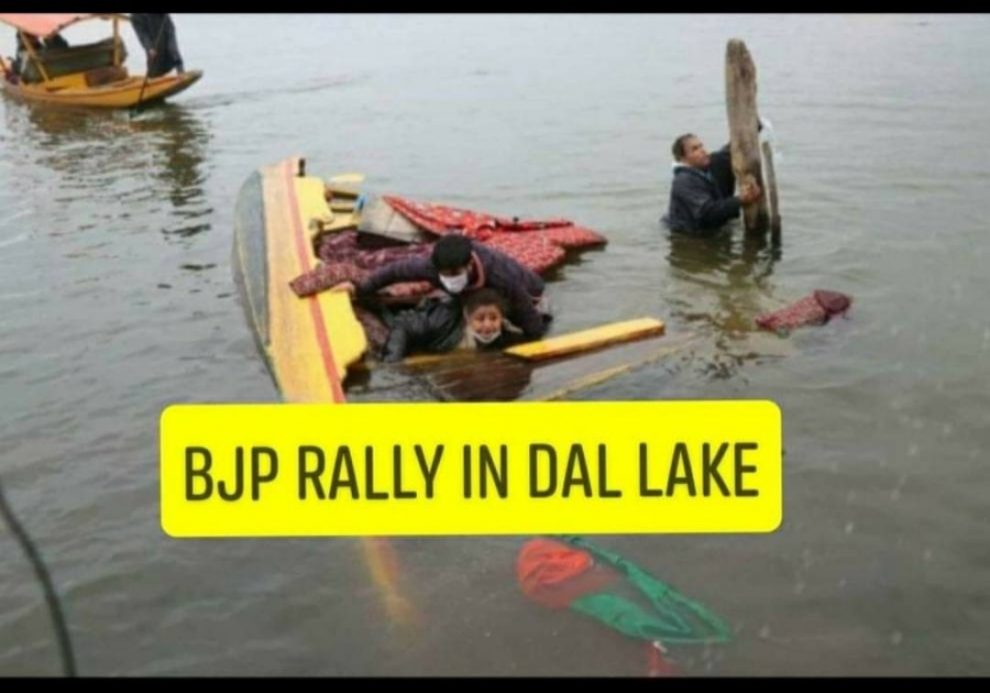 Kashmir: A boat carrying several BJP activists capsized as it arrived shore during campaigning at the Dal lake in Srinagar, Kashmir. At-least 4 BJP leaders and several media persons had to be rescued.

The boat carried Prominent ministers like Anurag Thakur and party national General Secretary, Tarun Chugh along with almost 17 other media personnel and local leaders like Altaf Thakur. Everyone was safely rescued as the boat was near the shore. They were traveling by a Shikara, a traditional wooden boat found in the Dal Lake and other water-bodies of Srinagar.

“There were many mediapersons on the boat. Thankfully everyone is safe. It was a very good rally at Dal Lake. The boat capsized when it reached the shore,” Mr Syed Hussain said.

The rally was during the sixth phase of the ongoing elections for the District Development Council. Anurag Thakur, who is the leader for the BJP’s DDC Campaign in Kashmir lead a rally attended by Tarun Chugh, Syed Shahnawaz Hussain and local leaders like Sofi Yousuf.

The Shikara capsized into the Dal Lake, the water being at sub-freezing temperature.As a precaution everyone involved in the accident received emergency medical assistance.

The ongoing election will be the first democratic exercise in Kashmir since the state was transformed into a union territory in 2019, by the abrogation of Article 370. It will see participation from over 7.42 Lakh voters in an election with 245 candidates of which 100 are women.

This story will be updated as new information comes in

Also Read: Israeli Officer claims about the existence of aliens and Donald Trump knows about them