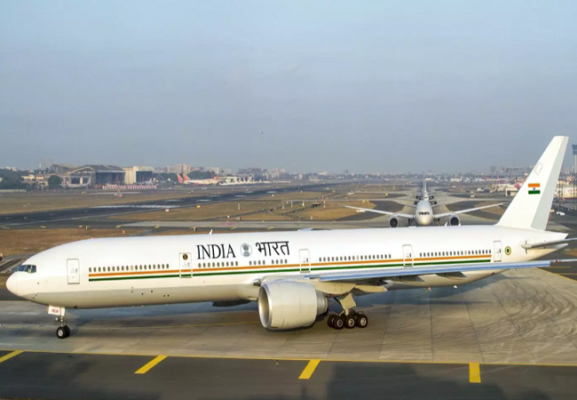 Boeing 777-300 ER, country’s first VVIP plane landed at the Indira Gandhi International Airport on 1st October,2020. The aircraft delivery was delayed by United States for three months due to the lockdown restrictions. The B777 aircraft would be operated by pilots of the Indian Air Force unlike the previous aircrafts used by the Prime Minister Narendra Modi were operated by Air India pilots. The special aircraft will also have “Bharat and India written on them, along with the Ashoka emblem.

Boeing 747 aircraft that Air India pilots operated to fly the Indian leaders whereas B777 will be fitted with state-of-the art defence systems, including missiles and jamming mechanisms would be operated by IAF pilots. When the Boeing 747 aircraft are not flying the Indian dignitaries, they are usually used by Air India for commercial operations, however, the custom-made B777 planes will be exclusively used for the travel of the dignitaries only.

A small welcome ceremony was conducted at the Airport where Directorate General of Civil Aviation and the Indian Air Force were present. A tilak was put on the body of the aircraft and sweets were distributed among the officials that were present. Air India’s Captain Himanshu Tiwari was the commander of the plane and flew it from the U.S. to India.

Statements by the officials regarding the VVIP aircraft

“The Boeing jet landed at 3.11 pm on Thursday,” a top aviation ministry official said. The delivery of the aircraft was delayed by more than a month due to “operational issues”, officials said.
The official team present over there further said, “The aircraft is now parked at the IAF’s (Indian Air Force) technical area at the airport and ready to be flown for VVIP use.”
“The delivery of the aircraft was scheduled for August 25 but has been delayed due to certain operational issues. It took a few weeks’ time to deliver,” another senior government official said, requesting anonymity.