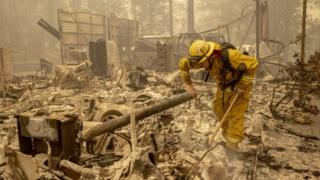 The year 2020 has been devastating. Starting from the deadly pandemic to disastrous west coast wildfires, the world has seen it all. The United States has been witnessing a high number of wildfires with California being the most affected part. Two new wildfires were reported in California recently and the effects were devastating.

Shasta Country and Wine Country in Northern California witnessed a horrific wildfire this week and its aftermaths were nothing less than a horrible dream. A terrible wildfire had broken in the same area three years back and the residents are still dealing with the loss and now this situation has returned once again.

Suddenly On September27, the residents were taken aback by a sudden wildfire reminding them of the horrific incident that happened three years ago. Three people have lost their lives to the horrific tragedy in Shasta Country whereas Wine Country lost the infamous Chateau Winery to the devastating fire.

Apart from that many people lost their homes and their livelihood to this unexpected calamity. Many citizens have given their testimonials stating that the Sunday wildfire was nothing different than the one they experienced three years back. Most of the residents have been evacuated to safer places and will remain there until the situation gets back to normalcy.

West Coast Wildfires And The Destruction

This year the world has witnessed a series of worst wildfires and one among them has to be the West Coast Wildfire which has affected many parts of the United States. And California is the worse affected.

It is speculated that more than 40 people have lost their lives and have ruined more than 7,000 structures so far. Apart from that, more than five million acres of forest land in places like California, Oregon, and Washington have been set ablaze by these disastrous wildfires. Moreover dealing with this amid the ongoing pandemic has become a challenge for everybody. It is not only affecting the people but is also shattering the economy of the affected nations.

As of today, more than 50,000 people have been displaced due to the horrific wildfires and the numbers are going up every day.

According to researchers and environmentalists, these wildfires are nothing but the after-effects of climate change. Also, many meteorologists have claimed that the worst is yet to come.

But some fires started because of human causes as well. On 5th September, a pyrotechnic device used at a gender reveals party became the cause of a devastating wildfire in El Dorado. Apart from that factors like lightning, downed power lines, winter snowstorms, powerful winds, etc. have also been a major cause of West Coast Wildfires.

But one cannot deny the fact that environmental degradation remains the primary cause of such kinds of disasters.

This might interest you: Northern California at the Mercy of Wildfires as Thousands Prepare To Flee

What Is BTS Rapper Suga’s Estimated Net Worth? Click To Find Out
Armenia accuses Turkey of shooting down one of its fighter jets
Comment