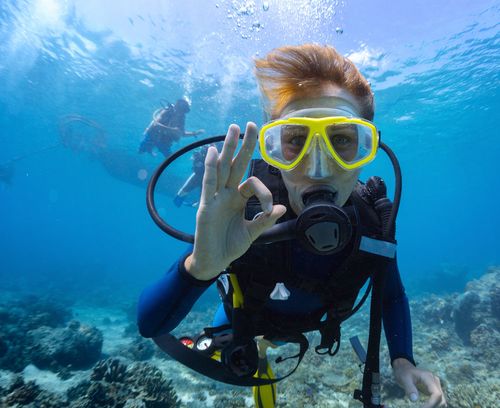 Egypt: Daredevils are a rare breed. Going to extreme length even risking your life just for the adrenaline rush. 29-year-old Egyptian, Saddam Killany, is one among those few and he has just set claim to a new world record for the longest open water scuba dive, after spending six days in the Red Sea.

His record attempt began on 5 November 2020, the Egyptian clocked in at145 hours and 30 minutes undersea, comfortably beating the previous record of 142 hours and 45 minutes set in 2017.

The diver insisted that he wanted to set the record as close to home as possible. He cited two reasons for this. One being favourable and familiar conditions with the latter being the objective of attracting more tourists to his home country.

This however may not be the first time you’re hearing about the diver. In September 2020, Killany made headlines for his engagement ceremony with fiancé and fellow diver Pia Lagora, UNDERWATER! They wore diving suits that resembled the traditional bride and groom outfit

He was scheduled to stay underwater for 150 hours but was withdrawn earlier due to health concerns. Killany was regularly checked on by assistant diver and medical profeesionals who worked in shifts, under the supervision of Adel Taher, director of the Hyperbaric Medical Center in South Sinai.All the underwater activity was being broadcasted straight to the Medical Center via camera.

Killany’s underwater journey began 8 years ago in 2012. It took him 2 years to complete the course. Killany intended to set the bar for the most time undersea after he witnessed Ahmed Gabr earned the record on his name for the deepest dive off Dahab in 2014.
The diver worked along with Vortex Robotics, an Egyptian company specializing in Underwater-Robotics