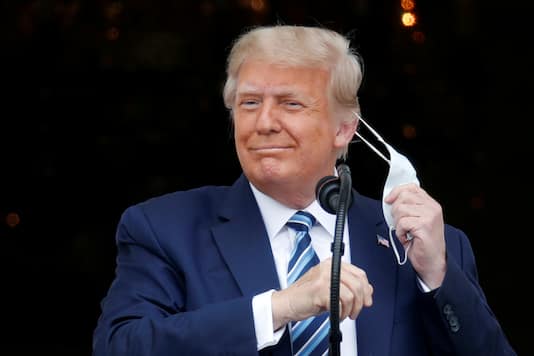 Donald Trump was recently diagnosed with COVID-19 and has now recovered. Upon his recovery, he held his first public event to show the US citizens that he was fit to be contested in the elections on November 3, 2020. This comes after he had refused to participate in the virtual Second Presidential Debate on October 15, 2020, against candidate Joe Biden.

Donald Trump has always seemingly opposed to wearing face mask amidst the pandemic. And it was no surprise that he didn’t wear one while addressing hundreds of public either. In his recent address to the public, he went without a face-mask at the White House Balcony. In his rally, he spoke about the “law & order issues” in the country. At the beginning of his speech, he said that he was honoured to welcome everyone who has come in his support. He said that this was a peaceful protest to support the men and women who work with them.

This campaign came after his physician Dr Sean had given him a clean chit to go out in public after the ten days from the first symptoms. The US Centers for Disease Control and Prevention have said that the people who have come in contact with the Coronavirus shall wait for at least ten days after the disease is tested. The patients should ensure that they didn’t have a fever in at least 24 hours before going out in public, without medication.

At the same time, the public health experts have warned people from coming in contact with each other and going out in public without a mask. And many of them questioned Trump’s decision not to wear one while addressing hundreds of people.

Donald Trump returned to the White House on October 5, 2020. Dr Anthony Fauci while talking to the press, said that Trump’s Supreme Court nominee event for Amy Coney Barrett was a “superspreader event”. He said that he has reasons to believe that the event had infected many people who came to attend it.

Donald Trump Claims That The Coronavirus Pandemic Is “Disappearing”

Donald Trump, in his address to the public, said that the pandemic is “disappearing” from the US Soils. He further said that they need not be scared of the Coronavirus and having himself been infected with that, he was “feeling great”. US has reported the death of 210,000 citizens from COVID-19 so far.

Trump further said that the power of the American spirit and the medicines and science that the “China virus” will be eradicated soon. He said that the world would get rid of the virus soon.

Healthcare agencies around the world have said that apart from face masks and washing hands, social distancing is also one of the key ways to prevent the spread. However, in the campaign held recently by Donald Trump, the supporters did not follow the social distancing norm. The people present to attend the event were tightly packed at the White House on Saturday to hear Donald Trump’s speech.