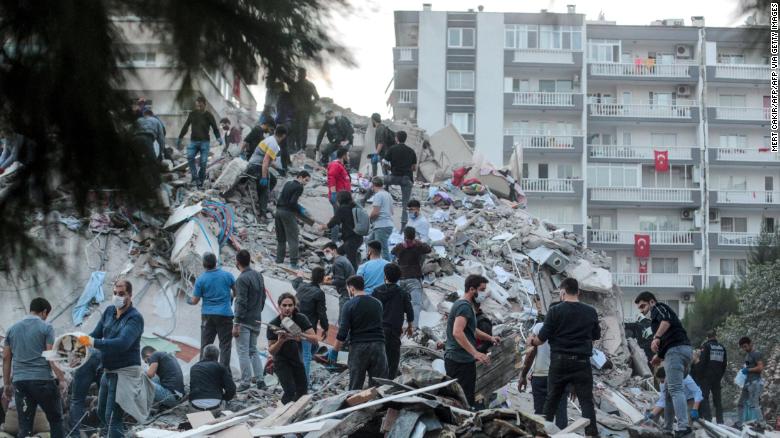 Earthquake seems to be the new the low in the year 2020. Recently, Greece and Turkey saw a massive earthquake hit that had collapsed buildings. And further surged the sea that flooded the streets in city of Izmir in Turkey. Greece television also reported a mini-tsunami on the Eastern Aegean Sea island of Samos which damaged the buildings in the residential areas.

Other images that surfaced online showed that water rushing through the streets of Izmir from a sea surge that is said to be triggered by the massive earthquake. Aerial images and videos show the entire city blocks turned to rubble. We also saw rescuers helping the residents and the police using chainsaw to remove the piles from the streets. At times, police had to force their way through the rubble to help the citizens stuck between the seven-floor building that collapsed.

Rescuers encouraged people around to be silent in case any survivor would scream for help. They helped clear the boulders and helped in the formation of the human chain. Turkish President Tayyip Erdogan said that he is ready to help the police and the survivors will all means available in Turkey.

“It was chaos,” said Erdogan.

As Greece was struck by a 7.0 magnitude earthquake, people rushed outside the buildings in a state of panic. Deputy Mayor Michalis Mitsios reported that the walls of some buildings have collapsed and several buildings have been damaged. Another Deputy Mayor Giorgos Dionysiou said that they have never experienced anything like that before.

Greece’s civil protection agency reportedly sent text messages to the people of Samos to warn to remain outdoors and away from buildings. The airport was also shut down as a precautionary step.