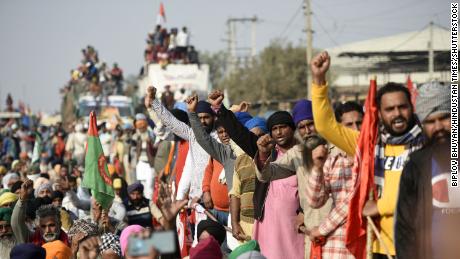 New Delhi: As the farmer’s protest reaches its sixth day around the borders of Delhi support for the movement keeps increasing.  On the 30th of November Sajjan Singh Cheema, ex-basketball player and Arjuna Award winner returned his award to protests against the new bill, encouraging his fellow athletes to do so.

Since then over 30 athletes who have won in the Olympics or other international awards have joined Sajjan Singh in his effort. This list includes Gold medals won by the 1980 Moscow Olympics Hockey team.

More support poured in from the sports world when former WWE Heavyweight Champion and Punjab native, The Great Khali showed up at the protest site at Delhi’s Tikri Border. He said that he supported the farmers and understands their concerns, hailing from a farming family himself.

Akali Dal leader and former 5-time Punjab CM, Prakash Singh Badal also returned his Padma Vibhushan Award to protest the “betrayal of the farmers”. “I am who I am because of the people, especially the common farmer. Today when he has lost more than his honour, I see no point in holding on to the Padma Vibhushan honour,” wrote the former CM in a letter to President Ramnath Kovind.

Celebrities showed their solidarity with the farmers through posts on social media. Former MP and TV Personality Navjot Singh Siddhu congratulated the Farmers for persevering and finally making the Government take notice. “Triumph of the Punjabi Spirit… Kisan Morcha is Democratic, Pristine, and Non-violent… Any Attempts by agencies to foil it – Will fail… Punjabiyat is our shield, Universal Brotherhood our philosophy and driving force!” he said on Twitter along with a video showing the struggles faced by the farmers during the protests.

Musician Diljith Dosanjh posted an image on social media on the occasion of Gurpurab.