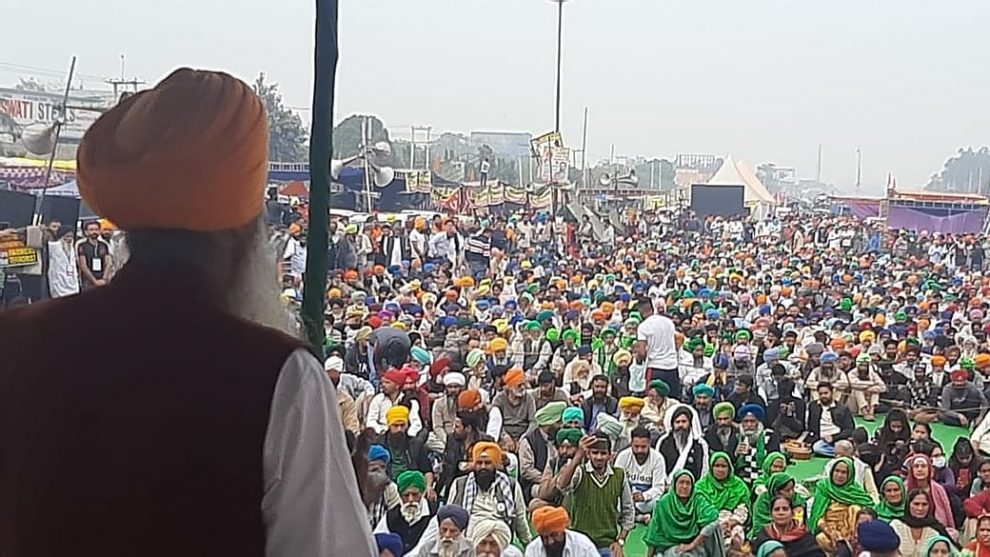 The anxiety against the new farm laws entered 18th consecutive days where hundreds of farmers are protesting for it at Delhi- Jaipur Highway. The police have stopped the march of farmers to the capital. Additionally, the leader of the farmers continued the protest at Delhi borders and convinced the Central Government to repeal the three new law farms. If they would not listen to them then they will continue the strike hunger from Monday to further escalate time. Both the sides have failed to reach an agreement and are maintaining their stance.

The leaders of the farmers said on Sunday that they would call a long day hunger from 8 am to 5 pm on Monday against this new law farms. According to the leader of the farmer, Gurnam Singh Chaduni said to the reporters that dharnas will be carry on at all district headquarters of the country. Shiv Kumar Kakka, farmer leader, told that the government has used their entire force to stop the protest but it won’t work until they didn’t get the demands. Another leader, Rakesh Tikait told that if the government give another proposal then they will decide on it and they will maintain the peace during the protest.

Farmers have stopped one side of Delhi-Jaipur National Highway

Framers from different area of the country gathered on the Rajasthan-Haryana border, Rewari to carry on their march towards Delhi. They joined the protest on the Delhi-Jaipur National Highway but the Haryana Police blocked them by using the barricades to stop them. The Superintendent of Rajasthan Police Abhisek Jorwal told the reporter that the district authorities brought Section 144 of CrPC.

Union Ministers Narendra Singh Tomar and Som Prakash met the Union Home Minister Amit Shah to discuss about the farmer’s issue in the presence of BJP leaders of Punjab. During the 40-minutes of meeting with Amit Shah, in his residence, they discus about the situation in Punjab and how they will settle it.

SC to hear plea to the removal of farmers from Delhi Border on 16th December The Supreme Court of India has scheduled a time to hear the pleading on 16th December for removal of farmers from the various borders of Delhi.  It was stated in the plea that the protestors give problems to the general people of India as they are blocking the roads due to which the commuters are facing the problems and it may also increase the COVID-19 cases.

The plea got filed by a law student Rishabh Sharma and will be heard by a bench consisting of Chief Justice S A Bobde and justices V Ramasubramanin and A S Bopanna as stated in the website of the Apex Court. Directions were sought in the plea from the authorities for the opening of the roads at the borders of Delhi. It was also asked in the plea that the protestors should get shifted to the allotted place and provide measures for social distancing and use of masks at the site of protests.

Arnab Goswami needs to pay 20,000 pounds as fine to UK
JP Nadda Lashes Out At Bengal CM After The Attack In His Convoy
Comment