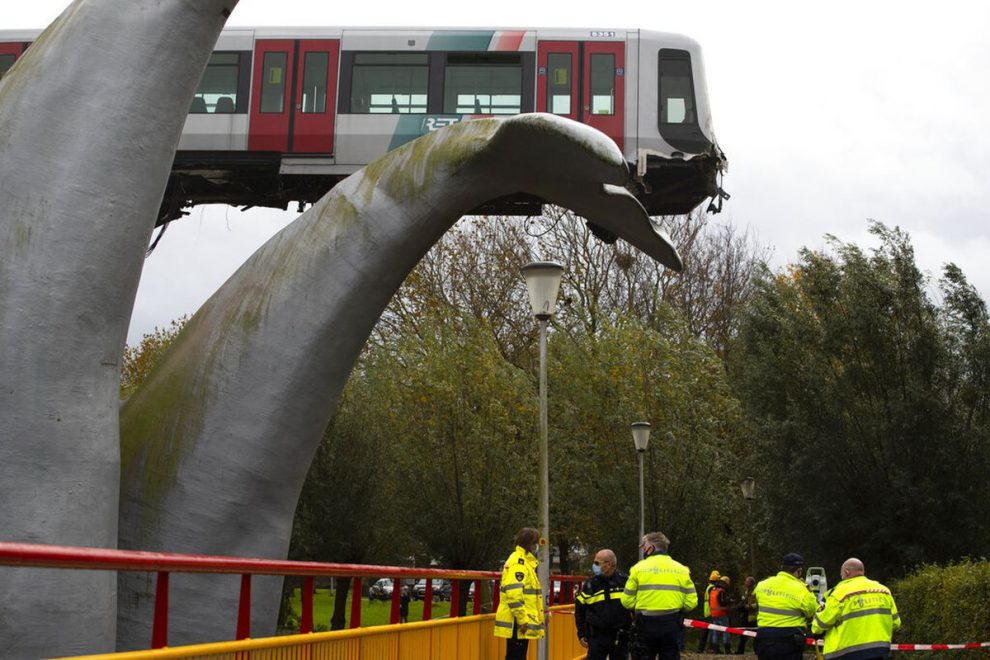 A Whale sculpture in Rotterdam saved a train from crashing and falling into the water. The train overran a station and landed upon a plastic whale sculpture.

Netherlands: A metro train in Rotterdam overran a station landed upon a plastic whale sculpture and was left balancing 10 meters above the ground and 30 feet above the water. however, the driver managed to free himself and escaped without injuries. There was no damage or harm to any life as there were no passengers on board. The trains drop off passengers at the station before continuing to a parking area, which is where the incident occurred. A report said if more people had been on the train the tail would have crashed causing a bigger mishap. Gary Wolf, a train derailment expert stated that there is no way the tail solely saved the train from a major accident. “The cars are articulated, meaning they have a physical connection between them, so the second car provided a downward holding force on the other car,” He explained. “Otherwise it would have gone straight down rather than extending out horizontally toward the tail. Gravity would have pulled it down immediately into the sculpture. Apart from the train cars being empty, and the whale tail sculpture standing in as a cantilever, there’s one more lucky part to this equation: the train must have been moving fairly slow, Wolf stated. Otherwise, when it burst through the end of the stop blocks, the train would have flown another 50 or 60 feet forward. It would’ve crashed into the whale tail sculpture and knocked it over, instead of resting on it. Carly Gorter, a spokeswoman for the authority, told that the first step is to stabilize the train so it doesn’t fall from its new perch on the artwork, which is named “Saved by the Whale’s Tail.”

Locals were reportedly woken up by a load crash shortly after midnight. The News of the unique crash spread and nearby residents quickly gathered on late Monday morning to witness the sight for themselves but the authorities warned people to stay away and stressed that coronavirus restrictions were still in place.

If you’re concerned about how will they remove the stuck train, Wolf says ” it’s perfectly routine to use a crane to move derailed train cars, as they’re capable of lifting more than 100 tons. Technicians will put straps beneath the train and use the crane to pull, easily moving the lightweight carriages, which are mostly aluminum” , however, things might be more complicated as officials say the train tracks are in a difficult spot, as the surrounding body of water will make it nearly impossible to get a crane on-site and high winds are also another dangerous factor.

An investigation is being conducted that causes a stop block failure, stop blocks are designed as a safety measure to keep the front carriage from falling off the edge track.