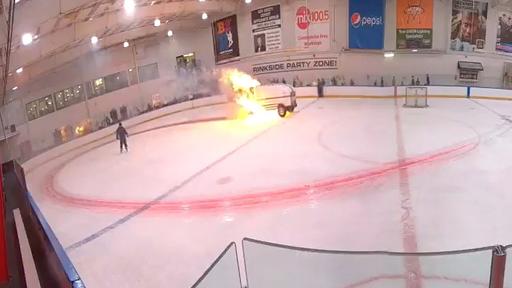 A horrific event was noted recently in New York City on Wednesday. As per the many videos and pictures over the internet, a resurfacer caught fire on the ice at a community rink. The machine caught fire in front of the audience including parents and children. However, no casualties have been reported so far.

As per the reports, a resurfacer burst into flames in front of terrified parents and children. The incident took place at ice community rink in New York earlier this week. It happened just before a youth hockey practice at the Bill Gray’s Regional Iceplex in Brighton, New York. Video of the incident was captured by many onlookers.

In the video, we can see that there was some red liquid that leaked out of the surfacer. The liquid rolled over the ice flooring, soon after we see smoke rising from the machine as it was about to reach the centre ice during the first lap. Immediately after, the machine burst into the fire and within seconds reached towards the driver’s seat.

Despite the fire, the driver could be seen keeping his cool throughout the event. While the flames were raging right next to him, he completed the lap around the rink and then parked the vehicle at its spot. As the driver passed through the parents with a burning vehicle, the parents could be heard gasping.

Junior Hockey scout Russ Bitely took to Twitter to share the video and picture of the ice resurfacer in flames. In the caption, he wrote, “Just 2020 being 2020”. As per the Lt. Ryan Fleming of the Rochester Fire Department, before they arrived at the venue, the driver had already extinguished the fire and the situation was in control. When they reached, they helped the driver bring the ice resurfacer outside and checked the venue for any other damage. However, everyone was safe.