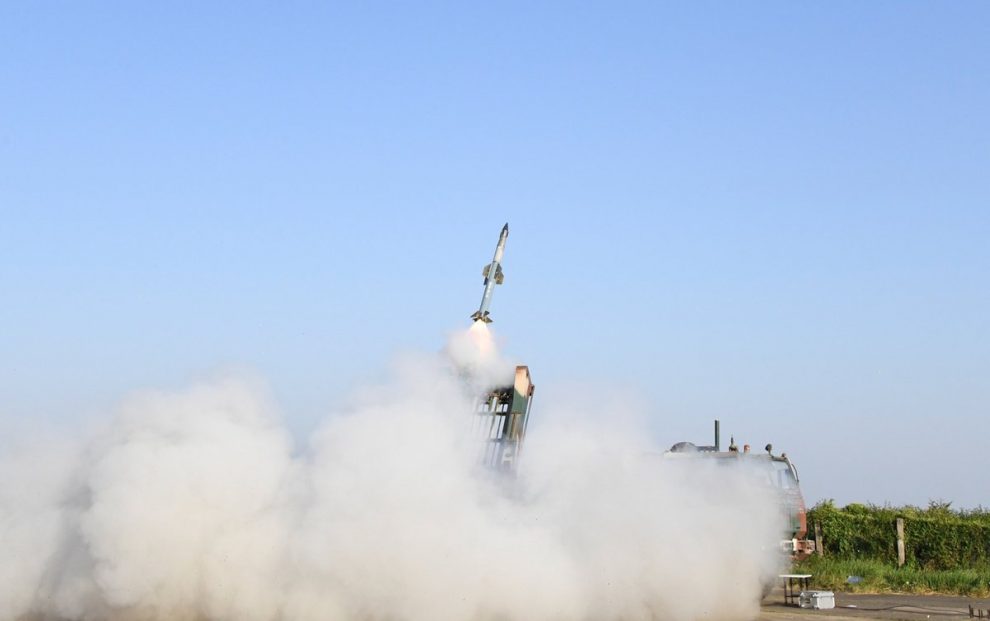 India test-fired a Quick Reaction Surface to Air Missile (QRSAM) to successfully hunt down and destroy a PTA (pilot-less target vehicle) off the coast of Odisha’s Balasore on Friday. It has achieved a major milestone by a direct hit on to a Banshee Pilotless target aircraft at medium range and medium altitude.

Ministry of Defence in a statement said that the missile launch took place from ITR Chandipur today at  3.30 PM  off the Odisha Coast. The missile is propelled by a single-stage solid-propellant rocket motor and uses all indigenous subsystems. The Missile is canisters for transportation and launch using a mobile launcher capable of carrying 6 canisters missiles.

The QRSAM uses a single-stage, solid-propellant rocket and is built using indigenous subsystems. It can be deployed from mobile launchers – each of which has six missiles carried in a canister to make transportation easier – to provide on-the-go support for ground forces

The Defence Ministry said, the system is capable of detecting and tracking targets on the move and engaging target with short halts and is designed to give air defence coverage against strike columns of Indian Army.

The missile can strike an aerial target cruising at a height of 15 km, is launched from a mobile two-vehicle system; one carries the missile and the second, the radar that helps acquire the targets. Because it is mobile, it can stay on the move and evade counter-attacks by the enemy.

Various DRDO labs, including the DRDL and RCI located in Hyderabad,LRDE,R&DE(E),IRDE, ITR etc. participated in the missle launch too

This might interest you: GDP contracts by 8.6% in Q2, India heads to a “Technical Recession”