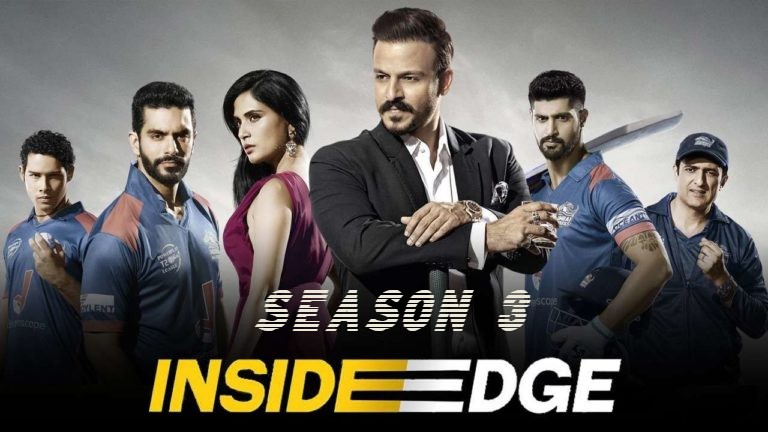 Inside Edge is a cricket and cricket politics based web drama series, it is said to be Amazon Prime’s first hindi web series.The story mostly revolves around a t20 premier league cricket team Mumbai Mavericks. When cricket fans watch the show they know there’s a lot of reality and reference related to the real life happenings from the history of t2o cricket premiere. It shows There’s always a game behind a game and Inside Edge helps lets witness the politics,greed,vengeance,passion,hunger and lots of drama.

With lots of positive critical applause Inside edge is a highly acclaimed series with a nomination in the 46th Emmy Awards for Best Drama Series in bag ,its been rated 8.0/10 on IMDb and is critically applauded.

Who’s in Inside Edge Season 3?

Vivek Oberoi in the lead as Vikram Dhawan,Amir Bashir as Yashwardhan Patil,Sapna Pabbi as Mantra Patil(Yashvardhan’s daughter),Richa Chadha as Sarina Malik ,Angad Bedi as arvind Vashisht and Tanuj Virwani as Vayu Raghavan.The cast so includes actors like Siddhant Chaturvedi ,Sayani Gupta ,Sanjay Suri to name a few,repeating their characters.Some sources confirm that Akshay Oberoi who has previously acted in films like Pizza,Piku and Kalakandi has also hopped into the cast playing the role of the captain of a new team in the ‘Power Play League’

The cast is almost the same as the previous two seasons ,there have been no confirmations about any new entities yet.

Neither did the show makers nor did Amazon Prime has yet confirmed about the release day,the the show was going under production it was brought to halt due to the obvious situations caused by the pandemic.Looking at the previous release paterns we anticipate that the fans will have to wait for The third season and it would surely not come out this year as the first two seasons had a two and half year gap in between.But it all depends upon the makers,you never know you would be able to watch the third season by the beginning of 2021!

This Might Interest You: Sex Education renewed for a new season?