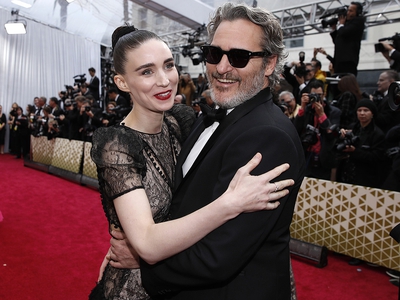 Oscar-winner actor Joaquin Phoenix and actor Rooney Mara has become parents when their first baby boy arrived today, Joaquin Phoenix has named River in memory of his Brother ‘River Phoenix’ who died in 1993 at the age of 23 of a drug overdose. So Couple has decided already to name him ‘River Phoenix’ in remembrance of his brother. The information about the couple’s baby arrival has been shared by Russian Director Victor Kossakovsky during a Q&A at the 2020 Zurich Film Festival on Sunday. He will be involved as an executive producer on his new documentary, “Gunda.” It was also revealed that Rooney Mara who is 35 years old and Joaquin Phoenix 45, has expected their first child arrival in May.

After months laters, Joaquin Phoenix has confirmed that they were dating each other and living together at Hollywood hills.

Why Joaquin Phoenix has given his brother name to his child?

Joaquin Phoenix has been devastated by losing his 23-year-old brother to a drug overdose at Johnny Depp’s LA nightclub in 1993. His brother was a sustainable actor and movie star as well. Many people didn’t know him but he has got famed for movies like “My Own Private Idaho.” and “Stand By Me.” In remembrance of his brother, Joaquin Phoenix has decided to name his son on behalf of his brother.