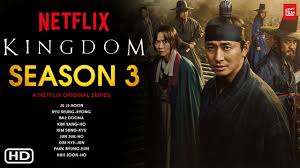 Kingdom is Netflix’s first original Korean series, which premiered on January 25, 2019, The series is adapted from the webcomic series The Kingdom of the Gods, which was authored by Kim Eun-hee and drawn by Yang Kyung-il. Set during Korea’s Joseon period, three years after the Japanese invasions of Korea. The King falls ill to smallpox and rumors start to spread that he has actually died. Meanwhile, Crown Prince Lee Chang is labeled a traitor by the Haewon Cho Clan, the clan of the current pregnant Queen and her father, Chief State Councillor Cho Hak Joo. While trying to uncover the mystery of what happened to his father, the Crown Prince goes with his guard, Moo-Young, to Dongnae to look for Lee Seung Hui, the physician that treated his father, only to be stuck with Assistant Physician Seo Bi and a mysterious man named Young Shin in a village plagued with a terrifying disease.

Will there be Season 3 of Kingdom?

Kingdom one of the most popular Korean series on the entire platform, scoring an incredible 8.4/10 on IMDB and 96% on Rotten Tomatoes, but the production team is confident that the show will return. Unfortunately, there is a possibility that the ongoing coronavirus pandemic could delay production for season 3 of Kingdom if the series begins filming in the next 6 months therefore 2021 premiere remains a possibility, a 2022 return is more likely. However, there is good news for fans of Kingdom, the series will return with a special episode next year ! Netflix will release a special episode of Kingdom called ‘Ashin of the North’ at some point in 2021. Whilst a more specific release date has not been confirmed, fans are hoping this special episode will premiere in summer.

Writer Kim Eun-hee is confident in developing stronger storylines not only for season 3. She confirms that she wants to bring the series up to season 10. She said “Strangely enough, Kingdom is a series that gives me more energy the more I write it. The cast and crew all have great chemistry, and there’s so much more to tell. If viewers allow, I would love to see it develop even up to season 10.” Also Kim Eun-hee has also explained Jun Ji Hyun’s role in the third installment. He notes that Jun Ji Hyun will have an important role to play in the upcoming season, along with the other main characters from season 1 and season 2.

What’s in store for the Fans?

According to the press release from Netflix, “Kingdom: Ashin of the North’ is a sequel from Kingdom season two and a backstory about the mysterious character Lee Chang’s group encountered on their journey north to discover the origins of the infected. The surprising appearance of Gianna Jun in the role of Ashin at the end of Kingdom season two intrigued audiences. In this eagerly anticipated bonus story, Jun as Ashin will unveil the mystery behind her identity. Park Byung-eun, who made a lasting impression in Kingdom season two as the head of the Royal Commandery Min Chi-rok, is also confirmed to star. The new story will detail what had happened to Ashin in the past in the northern region and how the two characters’ fates intertwined.”

Who’s in the Cast?

It is expected that all the lead cast members of the series will return for the third season. We have said goodbye to many stars in the second season. Here is the list of the stars who will appear in the third season. Ju Ji-hoon as Crown Prince Lee Chang, Ryu Seung-Yong as Cho Hak-Ju, Bae Doona as Seo-bi, Kim Sung-kyu as Yeong-shin jein.

The Last Kingdom returns with a brand new season, here’s all you need to know:
Designated Survivor Season 4 canceled?
Comment