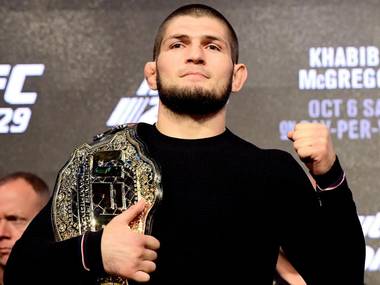 Khabib Nurmagomedov tore down as he sat at the ring as a champion, leaving his legacy for the world. The burden and the pressure of the past three months, he finally let go of him and expressed his emotions at the UFC 254 in Abu Dhabi, United Arab Emirates.

Khabib Nurmagomedov Wins His Last Fight With A Broken Leg

Khabib Nurmagomedov is one of the best fighters in mixed martial arts history. Given his condition and family situation, people believed that Justin Gaethje would be his toughest fight. However, his final match at the main event of UFC 254 on Saturday last week became one of his essential ones. He completed his iconic triangle choke for 1 minute and 34 seconds in the second round of the fight. UFC President Dana White revealed that he had a broken leg when he went for the fight. White said that the incident took place three weeks ago. Khabib has two broken toes and a broken bone in his leg.

This fight by Khabib Nurmagomedov was not only just his last fight but also his first fight ever since his father and coach, Abdulmanap Nurmagomedov died in July this year. He died because of the complications of COVID-19. He later announced his retirement from mixed martial arts.

In an interview, Khabib Nurmagomedov said that he would be taking retirement from the mixed martial. Arts. He said that after his father, he looked at his mother, and he knew that she didn’t want him to continue without his father. And he gave her his word that this would be his last fight. Khabib further shared a heartfelt message on Instagram to thank him for everything he has taught him. He further prayed to Allah to put his father in highest regards.

“If I give my word, I have to follow this,” said Khabib. He is retiring at the top of his game. The final touch to his career was the win over Gaethje when he took him down with his triangle choke. Gaethje went utterly unconscious. ESPN Stats and Information research reveal that Khabib Nurmagomedov’s famous triangle choke finish is the third ever in history.

“I know he made his father so proud,” Gaethje said.