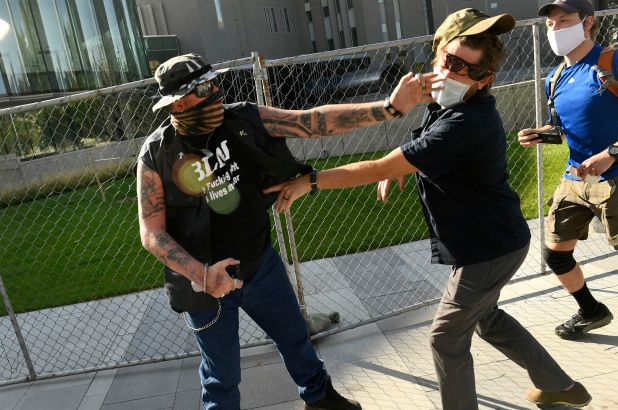 The Patriot Rally at Denver has recorded yet another death amidst the protest. As per the latest updates, a man was shot dead by a hired security guard at the protest this Saturday. The dead, Lee Keltner, has been identified as a military veteran.

Keltner’s Mother posted the video of his Son’s death on a Facebook group. He was shot around 3:30 pm outside the Denver Art Museum. Soon after he was taken to the hospital where he was pronounced dead. In the video, we could see that before the security guard was sprayed with what appears to be “maze”. Soon after we see Dolloff shooting Keltner and he falls on the ground. In an interview, Keltner’s mother, Carol alleged that he was murdered because he supported the Police personnel. The mother revealed that she had moved from Arkansas because Colorado was too expensive to live in and wasn’t very liberal. However, her decision had cost her son’s life.

The alleged murderer is identified as Matthew Dolloff. He was hired as a security guard from the Pinkerton Detective Agency. The Police said that the security Guard as no association with either of them. A local TV station, 9News – TV, confirmed to have hired security personnel to protect their reporters. The police have confirmed that the shooting has nothing to do with the Black Lives Matter-Antifa. Both the shooter and the dead are white men.

So far, the 30-year-old Matthew Dolloff is in police custody. But the charges regarding the incident have not been filed yet. But he is being held for the investigation of first-degree murder.