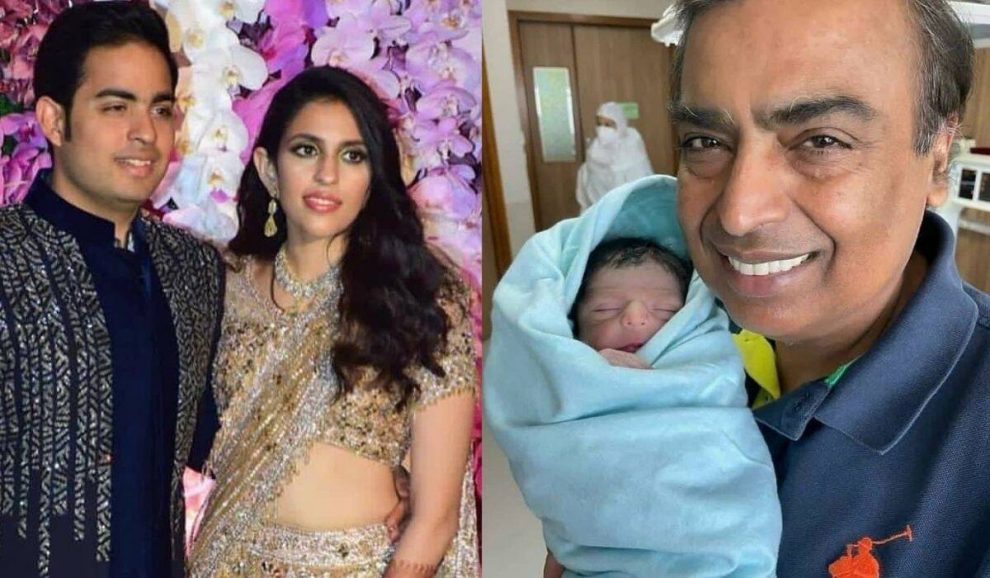 Congratulations are in order for the biggest businessman tycoon’s, Mukesh Ambani and Nita Ambani family as they recently welcomed a new member to their family. It seems that the year is ending on a high note for Mukesh Ambani who brought investments worth above Rs 2 crore in the year 2020 for Reliance Industries Ltd (RIL). Their son, Akash Ambani and daughter-in-law, Shloka Mehta welcomed their first child together making Mukesh and Nita Ambani proud grandparents now. They are very happy with the new arrival in their family. Many are wishing them for the newborn through Twitter. Akash and Shloka got married last year after their proposal in 2018.

Akash and Shloka welcomed their first child together which is a son on son on Thursday. The Internet got flooded and viral with a photograph of Mukesh Ambani who looked ecstatic holding in the hospital ward the hands of his new born grandson. In a statement, a spoke person for the Ambani family’s said that Nita and Mukesh Amabni welcomed the great grandson of Dhirubhai and Kokilaben Ambani who are very much delighted to become the grandparents for the first time.

In Mumbai, the baby boy was welcomed by Shloka and Akash Ambani who became proud parents. The son and mother are doing well. The Mehta and Ambani families are in immense joy with the new arrival. It was only in last month just before Diwali that the Ambani family returned to Mumbai after spending considerable time abroad. There are three children of Mukesh Ambani and his wife, Nita Ambani- the older ones are twins, Akash and Isha Ambani and the younger one is Anant Ambani. Akash is the eldest child of the Ambani’s.

Many people are sending their wishes on Twitter to the Ambani family with various posts. Director at Reliance Industries and Rajya Sabha MP, Parimal Nathwani posted a picture of the billionaire with his grandson and wrote that it is indeed a rejoicing day and sent his blessings and lots of love for the boy. Twitterati is already naming the boy as junior Ambani. Another Twitter user congratulated Shloka and Akash for becoming a bay boy’s proud parents and sent love for the newest Ambani while another user also sent heartfelt congratulations to the grandparents and also parents. It is also noteworthy that junior Ambani shares his same birth month as his great grandfather, Dhirubhai Ambani and Ratan Tata.

Shloka Mehta is the youngest daughter of the three children of diamantaire Russell Mehta and Mona Mehta. Akash and Shloka are said to have met while studying diamantaire Russell Mehta and Mona Mehta as kids. Akash proposed to her in earlier of 2018 in Goa and got engaged with each other in June of the same year. In March 2019, they got married to each other in the World Centre, Bandra-Kurla Complex, Mumbai in a grand ceremony. It was one of the most talked marriages of that year which saw the attendance of many famous persons of business, Bollywood, and political world.