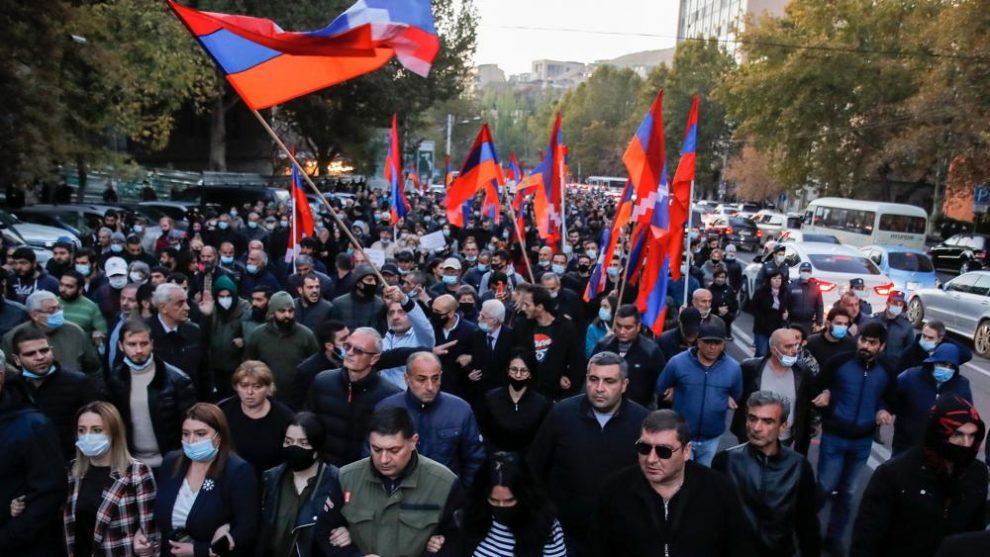 A decades-long conflict between Armenia and Azerbaijan over the enclave of Nagorno-Karabakh raised in late September into the worst fighting the area had seen since a vicious ethnic war in the 1990s. for years along the front lines of Nagorno-Karabakh, there has been a lot of tension, which is internationally recognized as a part of Azerbaijan but is home to ethnic Armenians. Since Turkey had offered more direct support to Azerbaijan, and because of the scale of the fighting. Both sides used drones and powerful, long-range rocket artillery. In the cease-fire, attacks had spread far from the front lines. Cities in Azerbaijan, Nagorno-Karabakh and Armenia have been hit by long-range weaponry fired by combatants on both sides.

This is a landlocked region in the South Caucasus, within the mountainous range of Karabakh, lying between Lower Karabakh and Zangezur, and covering the southeastern range of the Lesser Caucasus mountains. The region is mostly mountainous and forested. In Straddling western Asia and Eastern Europe, Nagorno-Karabakh is internationally recognised as part of Azerbaijan, but most of the region is controlled by Armenian separatists. Nagorno-Karabakh has been part of Azerbaijan territory since the Soviet era. When the Soviet Union began to collapse in the late 1980s, Armenia’s regional parliament voted for the region’s transfer to Armenia; the Soviet authorities turned down the demand

In November Russia brokered a peace deal between Armenia and Azerbaijan, the two countries that have been in a military conflict for over six weeks over the disputed region of Nagorno-Karabakh in the South Caucasus. The deal was signed by Russian President Vladimir Putin, Azerbaijani president Ilham Aliyev and Armenian prime minister Nikol Pashinyan to end the conflict between the two nations.

In the new peace deal, both sides will now maintain positions in the areas that they currently hold, which will mean a significant gain for Azerbaijan as it has reclaimed over 15-20 per cent of its lost territory during the recent conflict, also all military operations are suspended, Russian peacekeepers will be deployed along the line of contact in Nagorno-Karabakh and along the Lachin corridor that connects the region to Armenia.  the AFP reported.

But the agreement sparked outrage in Armenia, with angry protesters storming the government headquarters in the capital Yerevan where they ransacked offices and broke window,People entered Parliament and demanded the resignation of Prime Minister Nikol Pashinyan. “I have taken this decision as a result of an analysis of the military situation,” he said.the also marched and chanted “Nikol, traitor!” for impeachment of the Prime Minister.“I personally made a very hard decision for myself and all of us,” Pashinyan said in a statement posted online, describing the ceasefire terms as “unbelievably painful for me and our people”.

TikTok banned on 12th November in U.S?
“Hope they can laugh before declaring it contempt.”, Kunal Kamra after AG consents to proceedings against his tweets
Comment