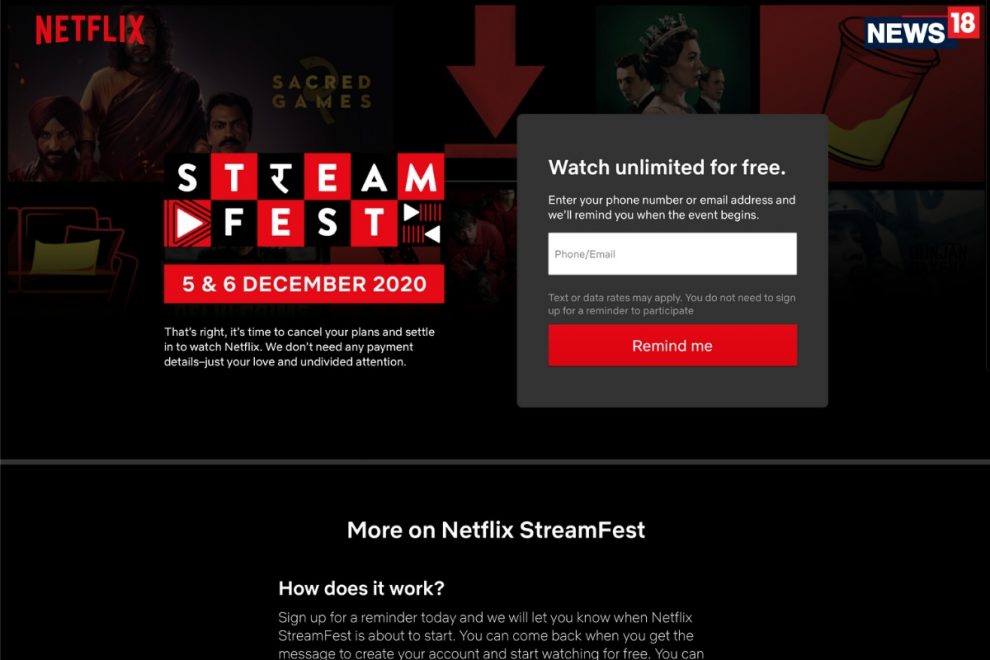 Currently, the OTT platform offers four subscription plans in India. The plans are Rs 199, Rs 499, Rs 649, and Rs799. The mobile-only plan is the Rs 199 plan which can get used at the Netflix mobile app and streams at up to 480p resolution.Rs 499 is also one of the basic plans that can get streamed on PC, TV or mobile and offers the same resolution as that of the Rs 199 plan. However, it is limited only up to one screen. Rs 649 is the standard priced plan which offers streaming in full HD Resolution and has the capacity of simulcasting at the same time on two screens.Rs 799 is its highest premium-priced plan in which streaming of content is offered at 4k+HDR and can be watched at the same time on four screens.

Netflix StreamFest is an unlimited binge-watching and free extravaganza whose goal is to convert the non-believers of Netflix. Netflix was available freely for streaming from December 5 to the people of India with the kickstart of Netflix StreamFest. The offer was given for 48 hours which went up until December 6. However, Netflix in a surprise decision extended the offer for more three days until December 9. Now, the non-subscribers can enjoy all the unlimited contents offered by the streaming service for a limited period. It will be available on all the devices from TVs, phones to much more.

Users can watch free content on Netflix either by downloading the app from the play store or heading to the website. The user has to have an account registered on Netflix. If one already have then they log in via the same. One who does not have, the can register by giving their email id and phone number. Only one user can log in at one account in one time. The resolution for watching will be the Standard one. Netflix also said that users can get the message that StreamFest at the capacity which means that the platform will give access to a limited number of users at a time. Users have to go to the website of Netflix StreamFest(Netflix.com/StreamFest) and give their email id and phone after which they will get notified when they will get access for free streaming on Netflix.