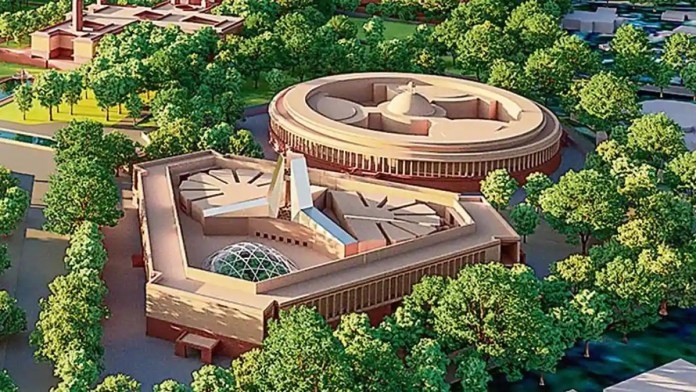 New Delhi: On 5th December(Saturday) Lok Sabha Speaker Om Birla invited PM Modi to the bhumi pujan ceremony of the new parliament building before announcing that the Prime Minister will lay the foundation stone for the structure. Construction of the project is set to commence immediately after the bhumi pujan.

The current building (The Sansad Bhavan) was constructed in 1927 and housed the Imperial Legislative Council which passed on to the Indian Parliament in 1950. The new building will cover an area of 64,500 square metres and is expected to be completed by 2022.

Stating the sentimental and symbolic value of the new building, Om Birla said, “We started the journey of independent India in the old building, and when we complete 75 years, we will have the session of both Houses in the new Parliament building… It will not be a building of bricks and stones, it will be the fulfillment of the dreams of 130 crore people,”

The speaker said the construction project will directly employ 200 people while about 9000 people will be employed indirectly. It will have 120 office spaces along with reading rooms for MP’s. The project will cost around 971 crores and has been assigned to Tata Projects Ltd.

Lok Sabha chamber, which will come upon 3,015 square metre area, will have 888 seats instead of present 543 seats spread over an area of 1,145 square metre. The new Lok Sabha Chambers will be able to accommodate 1,224 members during a joint session of parliament.

The new building is part of the extended Central Vista Project and will feature elements of Indian Culture from all states and territories. Over 200 artists from around the country will be working for the new building’s construction. The building will be constructed earth-quake proof and will be able to adapt to the ever-evolving technologies.

New amenities like smart displays, biometrics for ease of voting, digital language interpretation or translation systems, and recording infrastructure to produce real-time metadata will be part of the new building to make the process of democracy easier

Also Read: TATA in talks to buy 51% stakes of BigBasket