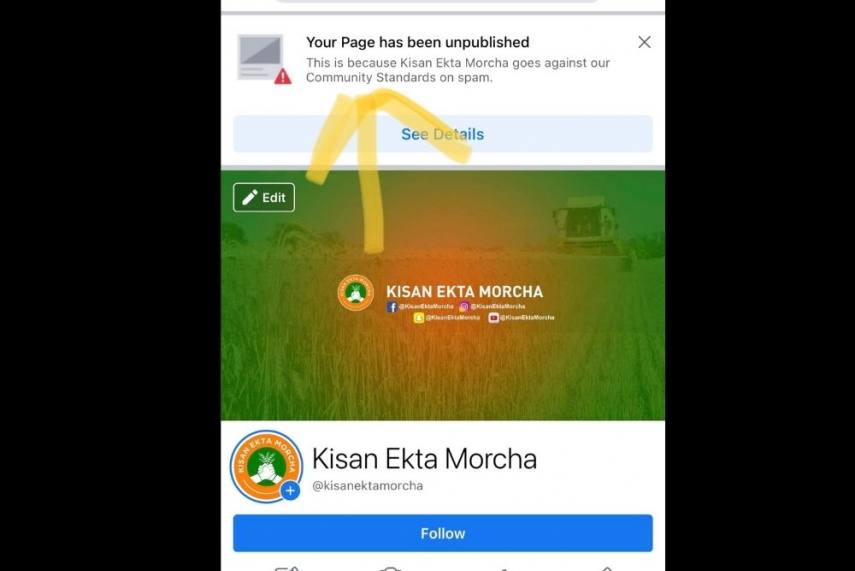 Social media giant, Facebook removed a prominent account on the evening of Sunday which the farmers used for protesting against the new agricultural law of the government of Narendra Modi. However, it also got restored later on after outrages were sparked in online. The name of the account was Kishan Ekta Morcha which identifies itself as the Kisan Andolon’s official platform and also has over 1,00,000 followers. Regular updates were published by the account on the protests, countering the claims of the Centre’s misinformation, and also gives farmer union leaders videos of speeches. It was not only the Facebook page but also the protestors alleged that the Instagram page too was taken down following a live broadcast.

It was at 7 pm in the evening of Sunday when the page got unpublished but again got accessible at night of 9:30 pm. The action came in the midst of the live broadcast which Swaraj India chief Yogendra Yadav was doing. Reportedly, Yadav in the live broadcast was stating that a day-long hunger strike will be started by the protesting farmers on Monday at all the sites of protests. Well, not only the farmers but netizens were also outraged with the action of Facebook and started back lashing them on Twitter.

Yogendra also tweeted the same action of Facebook on Twitter stating that when people raise their voice and they cannot beat ideologically, they can only do those. He further stated that he was doing live from the page of KishanEktaMorchawhen they got a notification that their Facebook page got unpublished. He added, “There must be something about farmers that this govt is particularly scared of & something about this govt that Facebook is particularly scared of.”

Restoration of the Page

The official page of the KisanEktaMorcha got restored later on after receiving massive outrage. Facebook stated that an increased activity was found by their automated system and flagged it as spam as the same violates the standards of the community. When they became aware of the context, they restored the page in less than three hours. They also said that they regret for causing such inconvenience.

According to the Community Standards of Facebook concerning spam, the company stated that the spread of spam is limited by them as they do not allow such contents which deceive or users are misled for increasing viewership.

The removal of the official page of the farmer’s protest is coming at the time when Facebook showed biasness towards the Bharatiya Janata Party. There is not only one incident but reportedly many more such incidents are there where Facebook favoured BJP. Bajrang Dal was not banned by Facebook even when there was a valid case against the. Now they are alleged for their non-removal due to business and political considerations. However, Facebook while banning the official page of the Kisans did not give valid reasons as to which part was found spam by them or is against the community standards of Facebook.