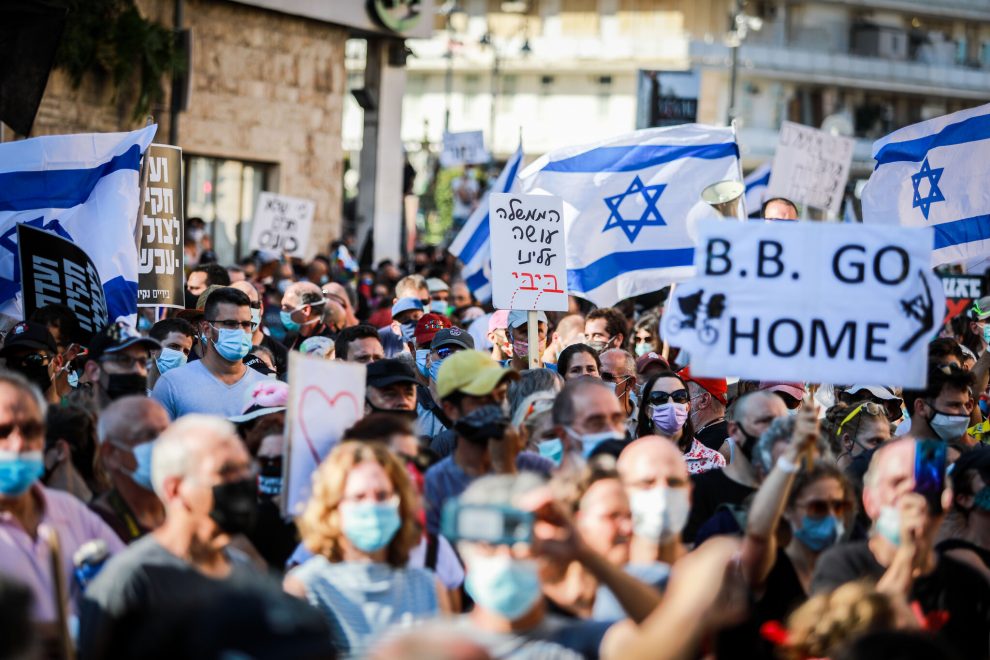 Israel: Thousands of protestors gathered in Jerusalem outside Israel’s Prime Minister Benjamin Netanyahu’s residence on Saturday demanding him to resign.

The protesters have gathered in several places like around Israel like Tel Aviv,Caesarea,Holon, Arab Towns of Taibeh,Umm al-Fahim and Kafr Yassif.

Weekly protests were held by mixed grassroots groups saying Prime Minister Benjamin Netanyahu must step down from his post as he is in a trial for corruption and because of his mishandling of Coronavirus in the country.

Israel’s economy is shaking after two lockdowns as a large number of has left a lot of citizens have been left out of work. Hence maximum protestors are Israelis who have lost their jobs.

Nearly all the protesters wore masks but none were seen practicing social distancing.The protest is going on since last six months but now the crowds are shrinking as the wintry weather is set in.

The protesters held the Israel’s flag and pink flags as a symbol of the protest.They also hoisted model submarines to highlight the scandal of purchasing of german submarines in which Netanyahu and his associates are implicated. Netanyahu has not yet been names as a suspect but Defense Minister Benny Gantz who also is Netanyahu’s rival ordered to investigate into this affair.

The scandal is known as The Case 3000 it has allegations of massive bribery scheme in the multi billion purchase if naval vessels from Ship builder Thyssenkrupp from Germany.This case has resulted to indictment against Netanyahu’s several associates and many highly ranked military officials.

Some smaller protests have also taken place at Caesaria which Is where Netanyahu’s private home also located.

The weekly demonstrations have been going on since 23 weeks in a row.

This might interest you: Iran Missile Programme Receives Support From Russian, Chinese Firms

The UK becomes the first Country to approve Covid 19 vaccine
Another lawsuit filed by Trump rejected by US appeals court.
Comment