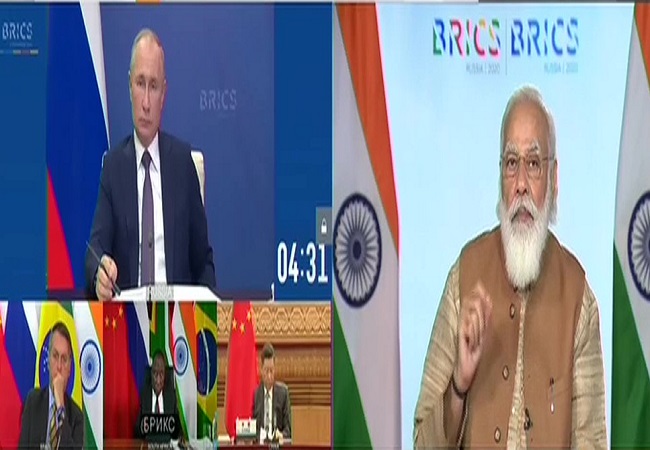 Russian President Vladimir hosted the 12th BRICS Summit this Tuesday.While addressing the Brazil Russia India China South Africa group summit via video conferencing he said that under the Atmanirbhar Bharat(Self reliant India) campaign which is based on the belief that self reliant India post COVID-19 can be a “force multiplier” for global economy and make a strong contribution to the global value chain.

He said that India is highly capable of efficient production and transportation facilities to fight the pandemic by emphasizing on how India was efficiently able to send the essential medicines to over 150 countries with the great capability of India’s pharmaceuticals industry “our vaccine production and delivery capacity will also work in the I test of humanity like this” he added.

The BRICS economies represent 3.6 billion people which is half the population of the entire world, PM Modi highlighted that these economies will play a very important role after the global pandemic is over,“We have more than 42 per cent of the world’s population, and our countries are among the main engines of the global economy. There is a lot of scope for increasing mutual trade between BRICS countries. Our mutual institutions and systems—such as BRICS Inter-Bank Cooperation Mechanism, New Development Bank, Contingent Reserve Arrangement and Customs Cooperation—can also make our contribution effective in the global recovery,”he said.

Not just the pandemic,he also highlighted that “Terrorism is the biggest problem the world is facing. We have to ensure that the countries that support and assist the terrorists are also held guilty,” PM Modi said,he didn’t point out any specific countries but the reference was Intended to point at Pakistan.

Xi Jinping has also agreed to cooperate with all the BRICS nations in developing vaccines against Coronavirus “As we speak the Chinese companies are working with their Russian and Brazilian partners on phase three clinical trials for vaccines. We are prepared to have cooperation with South Africa and India as well,”said Xi Jinping