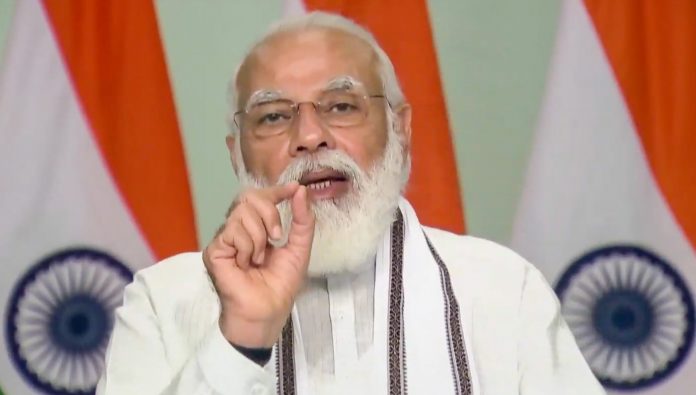 Modi connected with farmers throughout the nation via video conferencing. Agricultural Minister Narendra Tomar was also present there

New Delhi: The Prime Minister had his first two-way interaction with farmers ever since the new farm laws were passed. The PM had addressed farmers at rallies previously in Kutch. Meanwhile, farmers have been protesting outside the borders of Delhi for a month with talks between the centre and farmers having been bought to a standstill.

Agricultural minister Narendra Singh Tomar gave the introductory speech after which a bnew video was shown promoting the new farm laws. Prime Minister Narendra Modi then released Rs 18,000 crore as the next installment of financial benefits under the Pradhan Mantri Kisan Samman Nidhi (PM-KISAN) scheme in the bank accounts of nine crore farmers.

The PM then interacted with farmers from multiple states and asked them about the benefits they have received from the NDA government’s subsidy programs. A farmer from Odisha during interaction with PM Modi, said, “I received my Kisan Credit Card in 2019. I took an amount of Rs 27,000 on loan from the bank on a mere 4 per cent interest as compared to 20 per cent from intermediaries.” This prompted the PM to say, “I urge you to tell farmers about the Kisan Credit Card and its various benefits which include the availability of loans at low-interest rates.”

While talking to a farmer from Arunachal Pradesh who sold his produce to corporates outside his state the PM jokingly asked,”Are they only taking your crops or are they also taking away the land” He then talked to a farmer from Karnataka who employed many smaller farmers under him and thanked him for his service to the nation.

Modi signed off the address by wishing the nation a merry Christmas and expressing his hope that Christmas brings “Joy, Love and Happiness” throughout the nation. He then remembered the legacy of former Prime Minister Atal Bihari Vajpayee on his birthday and hoped the nation would be inspired by him to work for the betterment of the country.

He abruptly took a turn to attack his rival in West Bengal, accusing the TMC government of withholding the funds that were mean to benefit the farmers of the state. He personally attacked Mamata Banerjee saying she promoted politics of fear through her state after decades of left dominated politics.

Also Read: “No Democracy In India” Rahul Gandhi on state of the Country