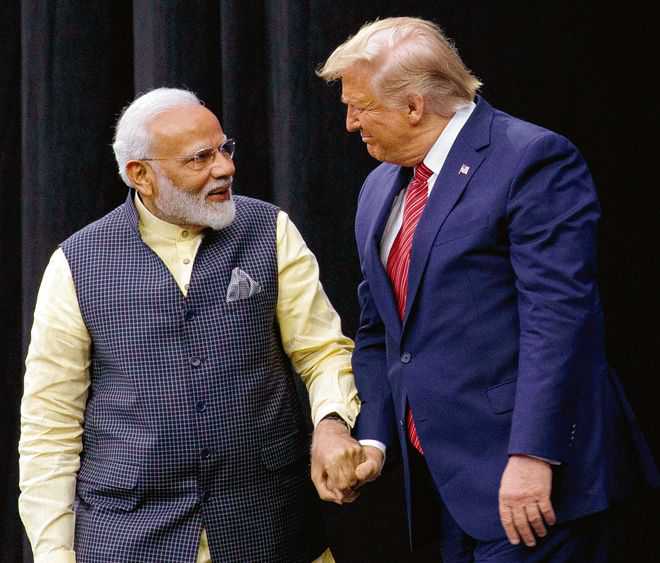 Washington: In the final month of his presidency Donald Trump acknowledged his friend and ally Narendra Modi by presenting him the prestigious Legion of Merit for his leadership in elevating strategic partnership of the two countries and boosting India’s presence on the global stage.

Indian Ambassador to the US Taranjit Singh Sandhu accepted the award on behalf of the PM during an event at the White House. Newly appointed National Security Adviser, Robert O’Brien handed out the award.

A tweet by the US National Security Council read, “President @realDonaldTrump presented the Legion of Merit to Indian Prime Minister Narendra Modi for his leadership in elevating the U.S.-India strategic partnership. Ambassador @SandhuTaranjitS accepted the medal on behalf of Prime Minister Modi.”

PM Modi was given the highest grade of the award being Commander in Chief of the Legion of Merit. Modi is also only the second Indian to ever receive this award, the first being all way back in 1955 when General Satyawant Mallanna Shrinagesh was awarded the Commander of The Legion of Merit.

Modi wasn’t the only world leader to receive the Legion of Merit. Former Japanese PM Shinzo Abe was also recognized for his role in developing a free Indo-Pacific region. Current Australian PM Scott Morrison was also awarded, his ambassador Arthur Sinodinos accepted the award on his behalf.

“President Donald Trump awarded the Legion of Merit to Japanese Prime Minister Shinzo Abe for his leadership and vision for a free and open Indo-Pacific. Ambassador Sugiyama @JapanEmbDC accepted the medal on behalf of Prime Minister Abe” said O’Brien through another tweet.

The USA was only the latest in the list of countries to award the Prime Minister with Their Highest Degree of Honor, the other awards include Order of Abdulaziz Al Saud by Saudi Arabia in 2016, State Order of Ghazi Amir Amanullah Khan (2016), Grand Collar of the State of Palestine Award (2018), Order of Zayed Award by United Arab Emirates (2019), Order of St Andrew by Russia (2019), Order of the Distinguished Rule of Nishan Izzuddin by Maldives (2019).