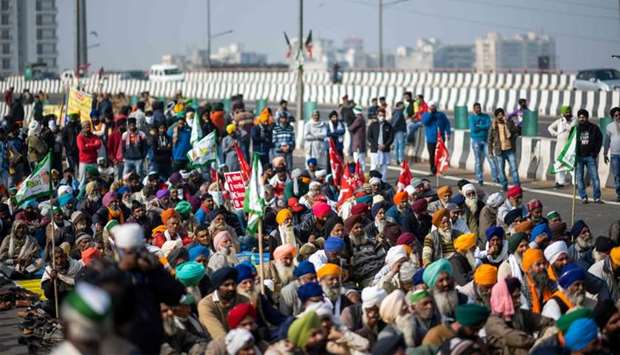 A one-day hunger strike began by the leaders of the protesting farmers against the recently passed reforms in agriculture which they say are threatening to their livelihood. They are stepping up pressure to the government of Narendra Modi for the withdrawing of the legislation. Demonstrations have been going on from several weeks by the farmers against the agricultural sector deregulation that will allow them to sell products with the assurance of a minimum price to buyers beyond wholesale markets of government regulated. However, the farmers are of the opinion that their livelihood is threatened by such laws which is only an advantage for the big corporations as the growers are at the hands of a free market.

The hunger strike began at Monday from 8 am which came to an end at 5 pm as farmers continues with their nineteenth day agitations. Farmer leader Darshan Pal said that they have given a call for protest all over India in all the districts. Different farmer organisations’ main leaders will began fasting as a protest means against the new agricultural reforms. They will consider it positively if government invites them for talks. While, another Protest leader of Punjab said that they want the government to repeal the laws.

It is not only the first time in two weeks, but a second one whereas nationwide protests have been called by the farmers asking people across the country to hold a sit-in outside the district offices. Thousands of farmers are spearheading the protests with them camping outside the capital of India, New Delhi and several highways leading to the city are also blocked by them.

Farmers are extended support by the Chief Minister of Delhi, Arvind Kejriwal and his Aam Aadmi Party by fasting with them on Monday. Kejriwal urged to join the agitation to the supporters of his party and also asked the Bharatiya Janata Party of Modi for shunning the arrogance and agree to the demands of the farmers. A spokesperson of BJP refused to say anything about the matter stating that they are advised to not to talk to the media about the protests since the representatives of farmers and ministers are still in the midst of holding talks. A group of Congress leaders including Rahul Gandhi in last week met with the President of India, Ram Nath Kovind and asked him for the revoking of such laws.

The changes brought by the government in agriculture are being feared by the small growers. Part of liberalising reforms by Modi means price support ending for the staples such as rice and wheat and also leaving them at the mercy of big business. Another farmer leader said they would step up protests throughout the country at district headquarters. The western state of Rajasthan’s farmers also tried to join the protest on Delhi on Monday. However, they were stopped from entering New Delhi by the authorities. It is one of the most pressing issue faced by the government of Modi with failure to resolve the same even after six rounds of talks.