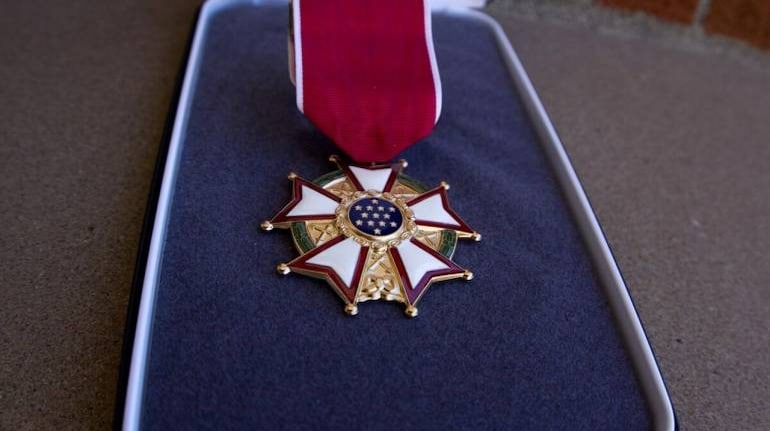 Donald Trump, President of the United States presented to Prime minister Narendra Modi, the prestigious award of the Legion of Merit, Degree Chief Commander on Monday for his role in the India-US relations, prosperity and global peace promotions. Taranjit Singh Sandhu, Ambassador of India to the United States, received the award on Monday on behalf of the Prime Minister. It was not only India but the award was also presented to Australian Prime Minister Scott Morrison and Japanese Prime Minister Shinzo Abe. The ‘Quad’ group of countries is formed by India, Australia, the U.S., and Japan who are also seen as an alternative to the dominance of China in the Indo-Pacific region.

Robert C O’Brien, National Security Advisor of the U.S. said that award was presented to Prime Minister Narendra Modi for his leadership in strategic partnerships elevation of the two countries. The Minister of External Affairs said in a statement that the award was in recognition of the steadfast leadership of the Prime Minister and vision for the emergence of India as a global power and his exemplary call contribution for the India-United States strategic partnership and promoting global peace and prosperity advancement.

Furthermore, O’Brien said that the award was presented to Australian Prime Minister Scott Morrison for his leadership in global challenges and promoting collective security and to former Prime Minister of Japan Shinzo Abe for a free and open Indo-Pacific leadership and vision.

Prime Minister Narendra Modi tweeted regarding the receiving of the award and said that he was deeply honoured for receiving the award and also referred to the support of bipartisan that is enjoyed by the relationship of India-U.S. It is from January 20, 2021, that Joe Biden’s democratic administration is all set to kick off. Mr Modi tweeted that the efforts of the Indian People and the US to improve bilateral ties is recognised by the award. There is also a reflection in the bipartisan consensus in both countries about the strategic partnership of the India-US.

Mr Modi further said that both unprecedented challenges and opportunities are presented by the 21st century. He said,” The India-US relationship can leverage the vast potential of our people’s unique strengths to provide global leadership for the benefit of entire humanity and firm conviction and commitment to continue working with the US government, and all other stakeholders in both countries, for further strengthening India-US ties.”

The award of Legion of Merit is rarely bestowed and the President of the U.S. can only award the medal. The heads of the state or the government is only given the award. The Legion of Merit, Degree Chief Commander has the words the United States of America engraved in reverse. The award is a heraldic form five-pointed domed American White Star Plaque that has purplish-red enamel as its border. There is also 13 white stars on a blue field emerging from a circle of clouds. The star is backed with a  laurel wreath.