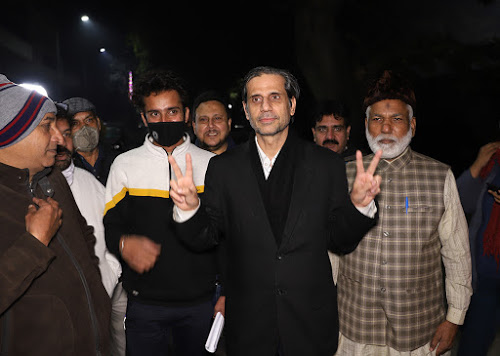 The internet is in huge sensation with the raiding by the Special Cell of the Delhi Police of the office of the advocate, Mehmood Pracha who is representing many accused in the conspiracy case of Delhi-riots. Reportedly, the Delhi Police under the issuance of a warrant from a local court for searching of the metadata of outbox and incriminating documents of the official email address of Pracha’s the law firm of Pracha. He was Chandrashekhar Azad, chief of BhimArmy’s lawyer in the cases concerning protests of CAA. A Delhi High Court has granted bail to Azad after hearing the arguments of Prachain cases which occurred during the CAA protests last year and is concerned with the violence of Daryagunj. The Court observed that reading of preamble to the Constitution does not amount to incitement to violence.

Pracha objecting to the seizure of his laptop

Journalist Aditya Menon posted a video of the raid in Twitter wherein Pracha is seen objecting to the Police concerning the seizure of his laptop and cited the privilege of client-attorney. Pracha said that the laptop cannot be seized by the Police although they can examine the same. The seizure will amount to privilege of the attorney-client breach. He also said the police officer that seizure will lead violation of the order of the court. The police officer replied that they only want the hard drive.

Journalist Fatima Khan also posted another video of the raid on Twitter wherein Pracha is saying that he is not allowed to meet anyone by the investigating officer. The warrant got issued on December 22 whose contents are as that information has been laid down before the court for commission of offences punishable under section 182, 193, 420, 468, 471, 472, 473, 120B and it also appeared to the court that investigation of the FIR 212/20 of Police Station Special Cell, New Delhi requires the incriminating data comprising false complaint and metadata of outbox of email account which was used to send incriminating documents.

Blaming on Amit Shah for the Raid

Advocate Mehmood Pracha hours after Delhi Police ended the 15-hour raid alleged that Union Minister Amit Shah is behind the raid. He tried to establish a link of Shah with the violence. Allegations also have been made by Pracha that Muslim victims were forced to withdraw their complaints and charged that a statement forcible extracted from one of the complainants under Sec 164 is used for targeting him. Pracha also said that Delhi Police Special Cell made a copy of his computer’s data during the raid as they had already brought specialized equipment with them and hacked his computer too.

The raid took place from December 24 of 12:40 pm and continued until December 25 of 3 am. The order for the raid was passed by additional sessions judge Vinod Yadav who had directed the commissioner of police for issuing of directions to the crime branch or special cell for probing the allegations against Pracha. Subsequently, a 15 long hour raid took place on the office of the advocate.