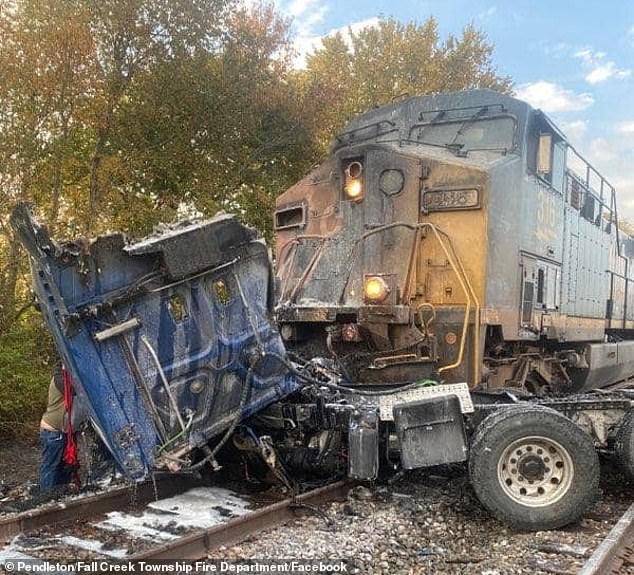 This news comes straight from Indiana, reporting a horrific incident that took place on Friday. A semi tractor-trailer which was stuck a railroad crossing was utterly torn apart by a train. The incident was shown in a video, recorded by the onlookers.

In the video shown, we could that as soon as the train crashed into the semi tractor-trailer, both got destroyed by the crash soon after it burned to flames. The crash happened around 5:40 p.m. at the 3300 block on Angle Road in Pendleton. In response to the video posted online, crews from Pendleton and Fall Creek Township Free Creek were dispatched to the accident scene. And they the vehicles burning to smokes.

The department revealed that upon their arrival, they saw that the train had pushed the semi tractor-trailer a couple of hundred yards from the place it was stuck in. When the fire team reached the place, they were able to control the fire and restrict any further damage from happening.

Pictures of the destroyed vehicles and burning along with the team handling the entire situation surfaced over the internet. We could see that the windows fo the semi-tractor was smashed.

No Casualties Reported During The Crash

So far no casualties have been reported in the crash. Reports suggest that there were people who were attempting to remove the stuck semi tractor-trailer from the railroads. They even heard the train approaching and were trying to push harder to remove the trailer. However, as soon as they realized that the noise of the trailer was getting stronger and louder, they left to save themselves.

Indiana Department of Environmental Management was called as soon as the Fire Department controlled the fire blaze. The Environmental department will clean the area and dispose of the hazardous material that has been spilt around the accident area. No further details regarding the accident have been revealed so far.