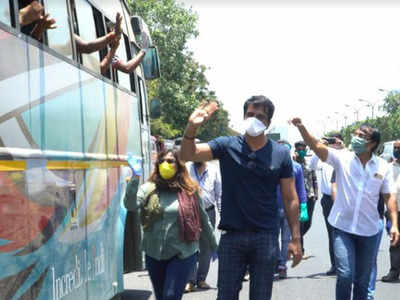 Punjab: If anyone walked out of this Pandemic with a better sense of responsibility it is Sonu Sood. While we might think responsibilities during a pandemic would be maintaining social distance, wearing a mask and avoid going out, with Sonu Sood it was a period where he realized his responsibility to the community by helping thousands of stranded workers back to their hometowns.

Sood’s selfless actions have led to him being declared the state icon of Punjab by the Election Commission of India. Sood who is a native of Moga District in Punjab will now represent his state as its icon.

The initiative was started by Punjab’s Chief Electoral Officer S Karuna Raju who send a letter seeking approval for the same to The EC. The EC has welcomed this move and granted the request.

Sood’s response to the crisis was swifter than most government organizations. What initially started through a fan responding to Sonu’s tweet, describing his conditions due to the sudden imposition of lockdown turned into a movement after the very first migrant was ready to be sent home. The actor worked tirelessly throughout the Lockdown, staying active on social media and partnering with a few NGO’s. He is the reason thousands of migrant workers did not have to make the treacherous journey back home on foot.