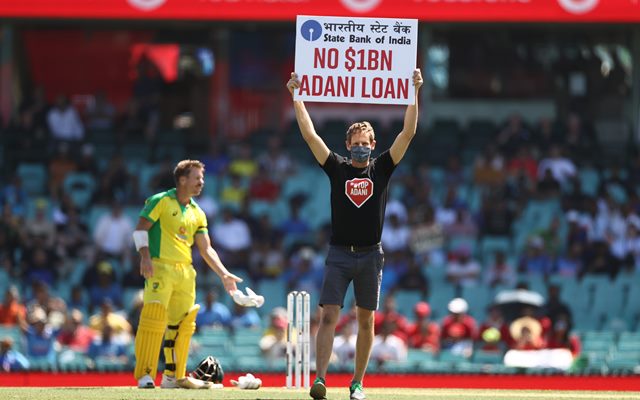 On the first day of the India vs Australia 2020 cricket tour. Hundreds of people came in to protest for the #StopAdani campaign at the Sydney Cricket ground and Indian Consulates in Canberra.

Two protesters also trespassed the security and made way to the ground during the opening ODI match between India and Australia with placards in their hands that read “No Adani loan” they were later escorted out of the pitch.The two men walked towards the fence at the beginning of Australia’s inning in the seventh over.They climbed over and jogged into the ground.

They came up with the demands that the State Bank of India should not provide Adani with a loan which SBI currently is considering to grant,to Adani to finance Australia’s financially troubled coal mine.

“Millions of Indian taxpayers who are watching the first game of the Indian cricket tour have a right to know that the State Bank of India is considering handing their taxes to a billionaire’s climate-wrecking coal mine,” Ben Burdett, who was one of the protestors, was quoted as saying in a media release.

The #StopAdani campaign is one of the biggest people powered campaigns in Australia.It aims to stop the Adani group from building Australia’s biggest coal mine project-The Carmicheal Project in central Queensland.The project has poli8support but has been into lot of controversies and faced opposition

The proposed Carmichael coal mine would stretch for over 30 kilometres and include the development of a 189-kilometre railway connecting the mine to the existing Hay Point and Abbot Point coal terminals, which would both be expanded. The project would also involve the construction of a private Adani airstrip in Townsville. The Adani Group intends to keep the mine open for 60 years and produce 60 million tonnes of coal annually, most of which would be exported to India. The project is marketed as a significant employment provider for Queensland, estimating it would create 10,000 jobs.

Over the last few weeks, a lot of people have come out in protests and also urged the State Bank Of India to not grant the loan to Adani group for funding the Carmicheal coal mine project. To know more about the #StopAdani campaign you can also check their official website.

This might interest you: Suresh Raina Pledges to provide Sanitation and Drinking Water to 34 Schools