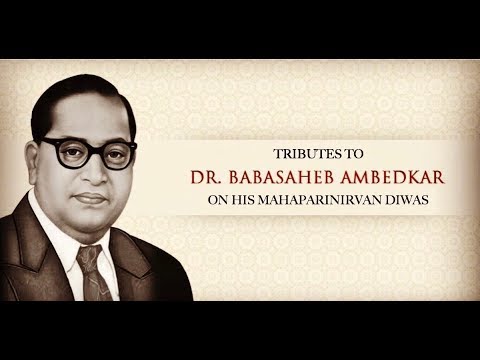 On Sunday, many people gathered at Chaityabhoomi in Dadar in Mumbai to pay tribute to Dr. Bhimrao Ramji Ambedkar, known as “Mahaparinirvana Diwas” on his 64th death anniversary.The Indian Government awarded Dr. Ambedkar with the most prestigious Bharat Ratna Award on April 14, 1990. In the central hall of the parliament building during this time a living portrait of Babasaheb Dr. Ambedkar was unveiled.

Parinirvana, perceived to be one of Buddhism’s key values and aims, is a Sanskrit concept that indicates release or independence after death. The death of Lord Buddha at the age of 80 is known as the original Mahaparinirvana, as per the Buddhist text, Mahaparinibbana Sutta.

Just a few days after finishing his last work, The Buddha and His Dhamma, a treatise on the life of Buddha and Buddhism, he died. Ambedkar believed that under Hinduism, Dalits could never get their rights.

His death anniversary is referred to as Mahaparinirvana Diwas owing to his position as a Buddhist leader. On October 14, 1956, after practising the religion for years, Ambedkar, who belonged to the Mahar caste that was considered untouchable in Hinduism, converted to Buddhism in Nagpur along with 500,000 followers.

Prime Minister Narendra Modi also recalled earlier on the day he is, recognised as the Indian Constitution’s chief architect. In a tweet, he said, “His thoughts and ideals continue to give strength to millions. We are committed to fulfilling the dreams he had for our nation.”

The Indian lawyer, economist, politician and social reformer Babasaheb Ambedkar (born on April 14, 1891) campaigned on Social Injustice against untouchables (Dalits) and advocated women’s and workers’ rights. On 6 December 1956, he died.
Ambedkar was awarded the highest civil honour in India, Bharat Ratna, in 1990.