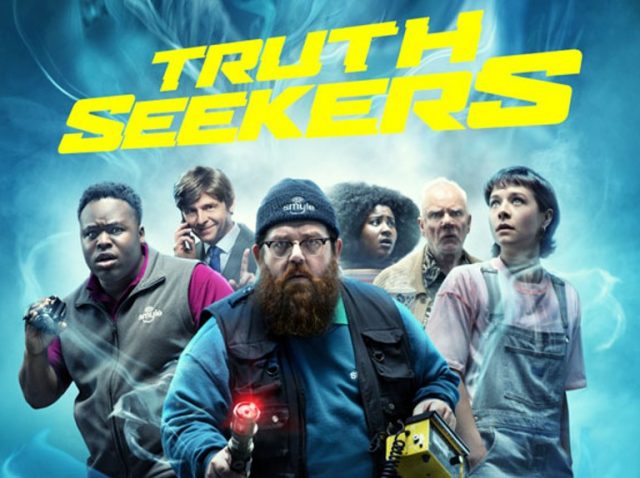 Truth Seekers Season 2 Is Going To Be A Long Wait

Who Will Be Back For Truth Seekers Season 2?

There is no official confirmation regarding the cast yet. But we are pretty sure that the original cast will be back for the second season. The lead cast includes Nick Frost, Emma D’Arcy, Malcolm McDowell, Rosalie Craig, Simon Pegg, Julian Barratt and many more. Apart from the actors, we are expecting the same crew for the series to be back as well. The crew includes the creator’s Nat Saunders and James Serafinowicz. Along with cinematographer Arthur Mulhern, costume designer Wiz Francis and the visual effects crew.

What Will Truth Seekers Season 2 Have In Store For Us?

The series follows Smyle Broadband Installer, Gus and his new assistant Elton John. At first, they both were apprehensive of each other being in the same team, but they eventually stumble upon paranormal activities. From there, they decide to explore the other side of the normal, more and more. As they move forward, they start to record everything that happens and go nuts when they meet Astrid. Astrid is a person who has been tormented by the ghosts from great beyond.

In the second season as well, we are expecting more fun and paranormal activities from Gus and John. We would love to see how their journey goes ahead and all the ghostly troubles they’d get themselves into. Even the previous season left a lot of questions unanswered. Previously we saw that Astrid said that his spirit is stuck in a frame. And Dave learns that he might not be from this planet. With the spirits and interdimensional space travel, we have a lot of expectations from the upcoming season.

Nick Frost, in an interview, said that he would love to see where the story goes. And he’d love to more chances of having biscuits with Samson in the van. So far, the story is pretty unpredictable, and the details are under wraps too. But we know that we can’t wait for the second season.