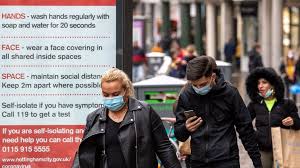 The United Kingdom Prime Minister Boris Johnson is planning to end the lockdown in England.The lifting of the lockdown is been scheduled on December 2nd and go back to regional restrictions as the infection rates of Coronavirus is now stabilized.

On Sunday,Johnson’s office made an announcement saying that the government plans to return to a three tier system of localised restrictions.

The government had put England in a four week i11 since 5th of November.The cabinet will discuss the plans on sunday and the prime minister aims to give the parliament the details on This Monday.

The Prime Minister’s office also confirmed that they will begin a nationwide vaccination program from December assuming that the regulators will approve the vaccine against COVID-19.They will also conduct mass testing till the vaccines roll out.

After the Public Health officials had warned the exponential rise of new cases Johnson announced the lockdown in England in October.

The Health Secretary Matt Hancock said that the lockdown was successful and there was a drop in spreading of the virus. New known cases have started to drop across the UK but the infection rates remain high with 244 cases per 100,000 people.

The scientific advisory group(also called as SAGE) in the UK will publish reports by Monday that the previous three-tiered strategies was weak and recommending tougher restrictions.

Under this system the medium level alert requires pubs and restaurants to close at 10pm and will prohibit the residents from mixing in groups larger than six whereas the high level will prevent people from gathering indoors with anyone who is not from their household and under the very high level alert the pubs and restaurants can remain open if they serve alchohol with hearty meals.In such areas people have been advised not to travel out of their homes.