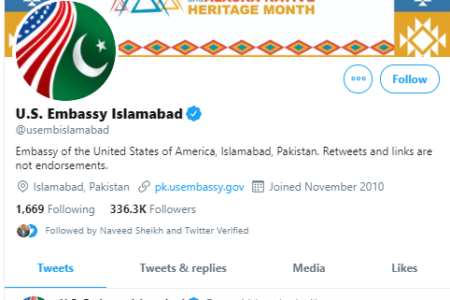 After The US. embassy in Islamabad after they had retweeted a post by an opposition lawmaker, alluding to Prime Minister Imran Khan as a dictator and demagogue. Tensions arose between the Pakistani Government and The US. Embassy.

Ahsan Iqbal, a former minister and a leader of the opposition PML-N party, quote retweeted a post by the Washington Post that said: “Trump’s defeat is a blow to the world’s demagogues and dictators.”We have one in Pakistan too. He shall be shown the way out soon Inshallah (God willing),” Iqbal had tweeted, without directly mentioning price Minister Imraan Khan.

The US Embassy’s Response

Several citizens and Ministers, including Sindh Governor  Imran Ismael, also demanded an apology from the Embassy. The US embassy account on Tuesday evening retweeted the above tweet, causing rage among the locals, On Tuesday, #ApologiseUS_Embassy trended on Twitter. The embassy also clarified on Wednesday that the tweet from its handle was unauthorized.

“Dear Followers: The US Embassy Islamabad Twitter account was accessed last night without authorisation. The US Embassy does not endorse the posting or retweeting of political messages. We apologise for any confusion that may have resulted from the unauthorised post,” wrote in a delayed apology tweet.

Pakistan Human rights minister Shireen Mazarihas on this commented that the US Embassy was lying that their account was hacked and that in fact, it was an embassy staff member who had retweeted, she also threatened that the move could impede issuance of staff visas to embassy personnel.

In response to the U.S. Embassy retweet, Pakistan’s minister Shireen Mazari, took to Twitter, saying: “U.S. Embassy still working in Trumpian mode in support of convicted absconder & intervening brazenly in our internal politics.” In another tweet, she said the “US Embassy must observe norms of diplomacy”.

GDP contracts by 8.6% in Q2, India heads to a “Technical Recession”
Ron Klain will be the new chief of staff in the White House
Comment