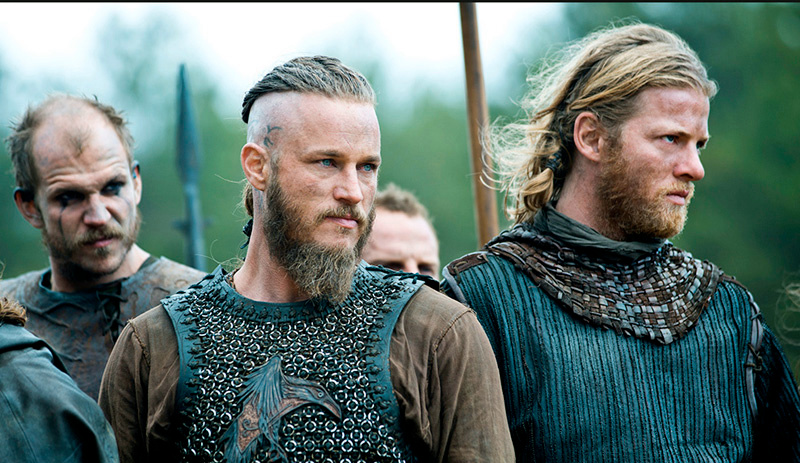 Here’s an interesting look into what it took to make one of TV’s grandest shows.

The Creation of Vikings was a business decision. The history channel was supposed to teach their viewers history mainly with documentaries. However, most people were not really interested in history. History Channel was able to survive by showing world war 2 documentaries and in specific those featuring Adolf Hitler which in turn gave them a disparaging nickname The Hitlery Channel.

At the time this was enough to help the channel survive but there was zero or no development. Later digital revolution stepped in providing platforms new ways to tell stories and the channel decided to produce their first scripted series. The aim was to deliver a historically accurate series that educates and entertains no matter what the topic. Initial plans included a series about the Aztec Warriors, Genghis Khan, The Samurai’s etc.

Ultimately channel turned to The Vikings as no other channel had a similar project under development. Later History contacted Michael Hirst who already had been a part of projects like” The Tudors”. Together they created a show that was a hit with the audience and critics alike which ultimately led the network to new direction

The estimated budget for the first season of the show was $40 million for 9 episodes. The series began production in July 2012 in Ireland at Ashford studios. This location was chosen specifically for its tax advantages. Scenes are also filmed at Luggala and the Poulaphouca reservoir in the Wicklow Mountains. 70% of the show’s first season was shot outdoors with some additional background scenes being shot in Western Norway

.The show’s known for its costume design. Its long-time costume designer had been Joan Bergin who worked on the show from 2013 to 2017 and was then replaced by Susan O’Connor.The head writer of the show until 2018 was Michael Hirst. The show has had 14 directors across 5 seasons with Ken Girotti directing the most number of episodes(14).

The crew consists of a total 630 members including 70 stunt crew members. It requires 1,950 extras at times 35 horses a massive 300 shields along with 120 swords. There are mainly 3 cameras which are responsible for 42 takes per day. The show also requires 6 real boats at any given time along with 2,174 boats to be digitally added.

Vikings have seen a steady increase in terms of critical reception over the years. It currently holds 93% rating of Rotten tomatoes and an 8.6 out of 10 on IMDb.The season premiere of the show had a primetime audience of 6 million in the United States. In Canada, the premiere audience mounted up to 0.9 million. The first three seasons of the show were broadcasted in India. It acquired the 8pm slot on History TV18. The viewership estimates are not clear although it was considered to be higher than average as it was followed by the
channel’s most popular show “Pawn Stars”.

As the show is set in the 9th-century advertisement or earnings through product placement is not possible. Instead, the show relies on advertisements. The show has a duration of 45 minutes and it occupies a one hour slot which leaves 15 minutes of advertising screen
time. The average age demographic for the History Channel is 58.

The average cost of advertising on History during primetime is around $15000 for a 10-second ad. In India History TV 18 offers ads on primetime for around Rs. 1000 per second. Vikings don’t have any specific advertisement partners which they have disclosed.

You can still stream Vikings on Netflix!

Fast 9: A Cursed Sequel
The Boys will be back for a Season 3
Comment