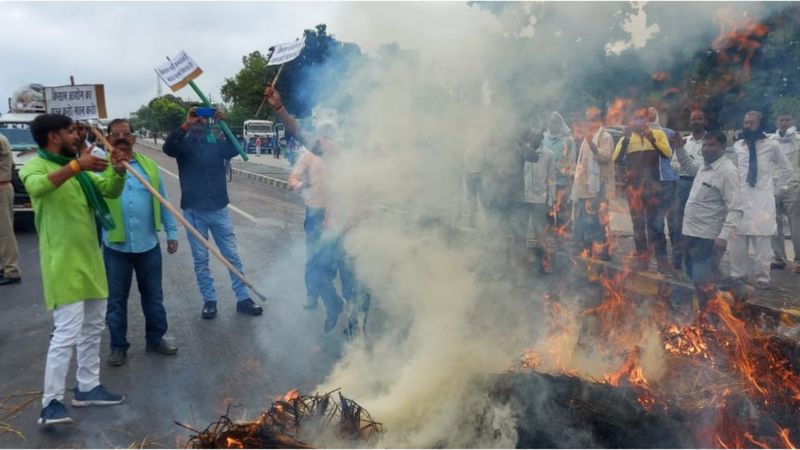 Indian Farmers from different states have come on road to protest against the newly passed Farm bill. They are blocking roads and several railway tracks across the states of the country. The most protests are concentrated in Punjab and Haryana. In these states, Farm yield is very high as compare to other states. Farmers said that protests continues to be intensified if these bills are not taken back. Farmer thinks that these three farm bill that has been passed without any opposition parties and kisan organizational, None was there, Its like dictatorship not Democracy.

As farmers thinks that these Farm bills will decrease their income rather than to increase. But The government denied this and said  that the reforms, which is opened the farming sector to private players, will hurt farmers. The ruling Bharatiya Janata Party (BJP), which brought the three bills into the parliament that contain the reforms, has defended them. It was said that it is necessary to increase farm incomes and productivity. While farmers in differenr states may already sell to private players, these bills offer a national framework.

It was confirmed through some of our sources that the farmers have clearly said that they will not stop protesting untill these three reforms were not taken back. In Punjab, Farmers including men and women have come on streets to protest and said that ” they won’t trust political leaders. It’s our fight and they will keep fighting it on our own. We don’t need them,”

What the Government is saying ?

Prime minister Narendra Modi has adressed the nation blaming opposition parties to misguide the farmers against these reforms. He also blamed rumours for the protest. He further said that every Bjp worker should reach to the farmers.

They will have to inform farmers in simple language about the importance of the new farm reforms, and how these may increase their earning. Our efforts will bust the lies and rumours being spread in the virtual world,”

Poonam Pandey Files FIR on her husband and claims being assaulted.
John Cena To appear In ‘The Suicide Squad’ Spinoff ‘Peacemaker’
Comment