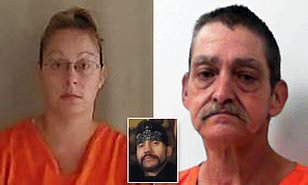 A woman who helps her biological father lure and kill her boyfriend so they could be together has been sentenced to 40 years in prison. Amanda McClure, 31, pleaded guilty to kill her boyfriend, John Thomas McGuire, 38 years old , in July is sentenced in court on 1st October, 2020.

The culprit woman was raised by her adoptive parents

While Mr McClure is her biological father, she was raised by her adoptive parents, Allen and Gwen Holm, adding they did not raise her to be this way”. The Bluefield Daily Telegraph reported Mr McClure was estranged from his two daughters and all three of them were involved with drugs. Mr. McClure drove with his daughter, Ms Choudhary, to Indiana to pick up Ms McClure and Mr McGuire. The four then drove to Sky Gusty in West Virginia, where Mr McGuire was staying after he was released from prison on sex offender charges.

Severe Injuries to the victim

Mr McGuire was hit in the head, injected with methamphetamine and strangled over three days before being killed in February last year, according to local publication WOAY. McClure’s father, Larry McClure Sr, 55, was sentenced in August to life without the possibility of parole after he admitted to bludgeoning and strangling McGuire to death.

Statements given by the woman for her crime

During Ms McClure’s sentencing this week, the 31-year-old offered a twisted explanation as to why she and her relatives committed the heinous crime.
“Mrs Smith, the only answer I can give you as to why things happened is John was with me,” Ms McClure said when addressing Mr McGuire’s mother, Karen Smith, according to the Bluefield Daily Telegraph. “My dad didn’t want anyone else near me. John told Larry that he loved me and we were going to get married.”
Ms McClure said she wished she could bring back Mr McGuire, describing him as a “good man”.